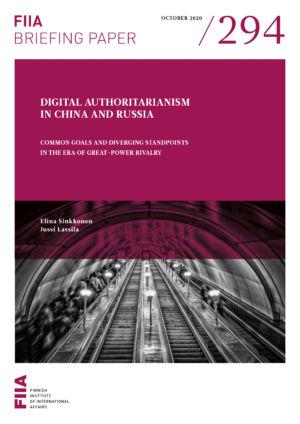 China and Russia are jointly advancing their shared interests in the international arena and are building up cooperation in the tech sector.

Despite far-reaching plans, the asymmetry of cooperation in favour of China is increasingly at odds with Russia’s national goals in digital technology.

Differences in resources and standpoints are also reflected in the implementation of digital surveillance. China’s surveillance system is sophisticated and extensive whereas Russia’s is largely inconsistent and emerging, as evidenced by the fact that there was virtually no control of the internet in Russia until 2012.

While advanced surveillance in authoritarian countries is worrying, technology in strategic sectors is also a key field of increasingly disconcerting great-power competition. As a result of strategic competition, the world is faced with the risk of technological decoupling, which would contribute to further fragmentation of the international community and deepening of existing rivalries.