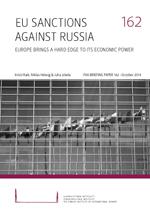 The EU has responded to the Ukraine crisis with a set of political and economic sanctions against Russia which constitute a qualitatively new step in the EU sanctions policy.

The EU sanctions against Russia are exceptional and have strategic importance due to a combination of three factors: big power rivalry, the context of a major European crisis with global ramifications, and the costs of the sanctions for the EU itself. The EU has managed to maintain its fragile unity and has applied its collective diplomatic and economic weight in very difficult circumstances.

The sanctions have not provided an alternative to diplomatic efforts to solve the crisis – on the contrary, hardening sanctions have been used as a way to put pressure on Russia to seriously engage in diplomacy.

The impact of the sanctions on daily developments in Ukraine has been limited and uncertain, but the sanctions have imposed a long-term cost on Russia for violating key international norms.

The policy process of Russia sanctions has exposed problems of leadership and coordination. The latest reform of the EU foreign policy machinery has streamlined the preparation of sanctions, but the current system still lacks the necessary resources to match the growing importance of the EU sanctions policy.