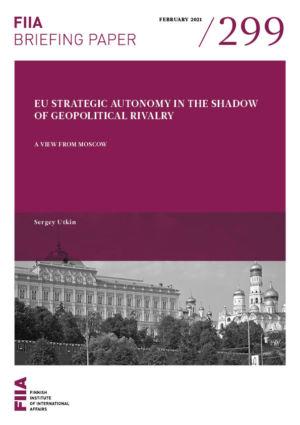 The EU is determined to maintain the transatlantic bond, while Russia tends to interpret the EU’s strategic autonomy precisely as autonomy from the US. The Western unity effort is significantly strengthened by the poor state of the EU’s relations with Russia.

Russia is ready to pay lip service to the idea of a more capable EU, but instead it sees opportunities in areas where bilateral cooperation with member states is possible. The EU-wide consensus is doomed to remain critical vis-à-vis Russia for the foreseeable future.

The EU will increasingly focus on gaining autonomy from Russia, primarily in the energy field and in terms of hard security deterrence.

The EU-Russia geopolitical tension, centred on the common neighbourhood, is long-term and might cause as yet unseen damage to the relationship if it is not handled carefully.