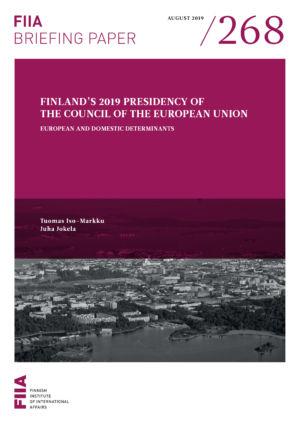 The Finnish presidency of the Council of the EU faces a sensitive political climate, marked by divisions between the member states. However, some of the EU’s recent crises have also given the Union a renewed sense of purpose: striking the right balance between ambition and realism will therefore be a key challenge for Finland.

During its presidency, Finland will have little legislative work, but can help in setting the EU’s priorities for the next five years, advancing the negotiations on the Multiannual Financial Framework and managing the Brexit process.

The rise of the Eurosceptic Finns Party in the late 2000s had a crucial impact on Finland’s EU policy. This was reflected in harder and, at times, obstructive positions on EU issues. However, recently a new consensus on EU affairs seems to have emerged among the other parties.

Antti Rinne’s new government is striving for a stronger EU with a presidency programme that resonates with the strategic agenda of the European Council, but also corresponds with the more limited role of post-Lisbon Treaty presidencies.

The changing global order and its implications for the EU