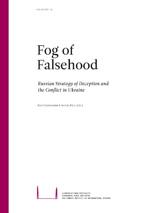 This report analyses Russian propaganda and disinformation – here collectively called strategic deception – concerning the conflict in Ukraine. The strategic deception is not exclusively a Russian term, but it does capture what we think is an essential feature of the current Russian foreign and security policy. It is driven by attempts to put the adversary into a defensive posture and off balance, and thus, to create conditions for surprise.

The main purpose of this report is to examine in detail the emergence and evolution of Russian metanarratives and the terms of distraction about the conflict in Ukraine, and on the basis of this analysis to ascertain the main policy objectives of Russian strategic deception inside Russia and in selected countries of the European Union.

It is concluded that the best defence against strategic deception is well-grounded, fact-based knowledge and the willingness to invest into gathering it. No fog of falsehood is able to penetrate the solid walls of well-grounded knowledge and firm commitment to one’s values.

NB: Errors that appear in chapters 9, 10 and 11 of the printed report have been corrected in the online version.