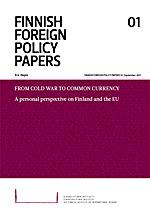 FROM COLD WAR TO COMMON CURRENCY

The Finnish Institute of International Affairs, which today celebrates its 50th anniversary, has published a treatise on Finland’s integration into the European Union, written by Eric Hayes, a former official of the European Commission.

Mr. Hayes’ text, entitled From Cold War to Common Currency, is a detailed story of how Finland decided to apply for membership in the European Community (later to become the European Union) and what were the main challenges during the accession negotiations. Mixing political history with personal observations, Mr. Hayes paints an elaborate picture of how Finland “came in from the cold”.

The publication of Eric Hayes’ work marks the launch of a new publication series by the Finnish Institute of International Affairs, Finnish Foreign Policy Papers. As the name implies, the papers published in this series will concentrate on Finnish foreign policy.

Neither neutral nor non-aligned: The Europeanization of Finland’s foreign and security policy