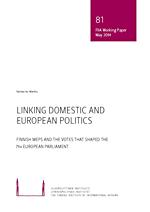 Existing research suggests that in the majority of voting situations, MEPs vote in line with their European party groups. However, national parties have the means to turn their MEPs against the party group if their policy position is very far from that of the party group and if the issue in question is very salient to them. The situation of the Finnish MEPs working in the 7th European Parliament (2009-2014) has been particularly interesting in this respect. The eurozone crisis has led to marked politicisation of EU issues in Finland. The salience of EU issues in domestic politics could be expected to provide a stronger incentive for the Finnish parties to control their MEPs and, conversely, for Finnish MEPs to pay attention to the domestic debate.

An analysis of the voting behaviour of the Finnish MEPs in 17 key votes supports the results of previous studies on MEP voting, suggesting that Finnish MEPs tend to vote in line with their party groups, particularly in votes on issues with little or no links to domestic politics. However, as previous research on MEP voting demonstrates, party group cohesion can break down if an issue is considered to be of high national salience and if the national party’s and the European party group’s positions differ markedly.

Somewhat surprisingly, none of the most visible EP votes in Finland during the 7th EP’s term had to do with the eurozone crisis. Instead, two of the most visible votes were the vote on the directive limiting the sulphur content of marine fuels and the vote on the working time of road transport personnel. The former clearly demonstrated that nationality can play a significant role in the EP if the issue in question is framed in national terms and is widely covered by the domestic media. Seven Finnish MEPs in all defected from their respective party groups to oppose the directive.

Although the EP votes on the management of the eurozone crisis were not very visible in the national media, the voting patterns among Finnish MEPs indicate that these issues are both contested and salient in Finland. In the vote on Eurobonds, four MEPs in all defected from their party groups and either abstained or voted against the Eurobonds. The votes on Eurobonds and on strengthening the supervision of the budgets and economic policies of the eurozone members also mirrored the domestic fault line between the government and the opposition to some extent, as the Finns Party MEP and the Centre Party MEPs voted against both resolutions. However, in general coalitions and cleavages within the EP vary greatly.

A Eurosceptic big bang: Finland's EU policy in hindsight of the 2011 elections