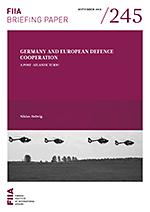 Tensions in the transatlantic partnership are spurring the German debate on how to prepare for the possibility of a post-Atlantic Europe.

Germany has renewed its focus on the EU’s security and defence policy. This includes long-term initiatives to improve European operational readiness, as well as recognition of the EU mutual assistance clause in the doctrine of the German armed forces.

However, efforts by German politicians to convince the public of the need for a greater international engagement face difficulties as Germans see the threat as negligible and eye the military with suspicion.

The challenge for Berlin remains to step up the ambition for European defence cooperation, while avoiding new fault lines among EU members.