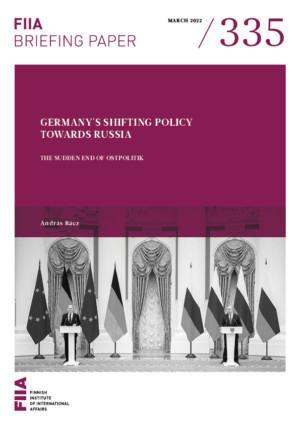 A reassessment of Germany’s relations with Russia started after the annexation of Crimea in 2014, and was catalyzed by several offensive actions taken by Moscow, including hacking attacks against the national parliament, disinformation campaigns, as well as an attempt on the life of Russian opposition politician Alexei Navalny.

The new German government, formed following the September 2021 Bundestag election, is different from its predecessors in all important respects regarding foreign policymaking towards Russia. The Chancellor, the governing coalition, as well as the composition of the parliament have all changed.

These changes have been pushing Germany towards a gradual reconsideration of its traditional Ostpolitik, which perceived mutually beneficial economic cooperation with Moscow as a guarantee of stability and predictability in Europe.

Russia’s full-scale war against Ukraine, launched on 24 February, marks the point of no return. The war made Berlin cross several important red lines of German foreign policy, such as agreeing to very heavy sanctions against Russia, halting the Nord Stream 2 pipeline, and delivering weapons to Ukraine. This de facto marks the end of Ostpolitik.

War in Ukraine: The European Union evolves as Putin attacks