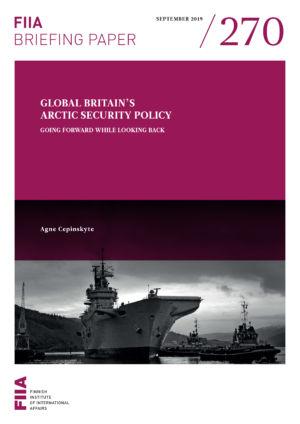 Britain’s Arctic security policy has been shifting from abandoning the region after the Cold War to developing a non-military security approach, to reintroducing the military defence dimension, most notably by the announcement of the UK Defence Arctic Strategy (DAS).

These changes are both reactive to regional factors, namely the increasing geostrategic importance of the Arctic and Russia’s military expansion in the North, and reflective of the UK’s redefined post-Brexit identity as Global Britain. The focus on expanding the naval presence in the Arctic is consistent with the Global Britain vision, which underlies the UK’s broader foreign and security policy direction and emphasises the reassertion of naval strength and global maritime influence.

While Britain’s ambition to restore the naval power in the Arctic and the North Atlantic is currently constrained by a lack of resources in the defence budget, it indicates an aspiration to strengthen historically rooted naval defence relations with the Arctic states.