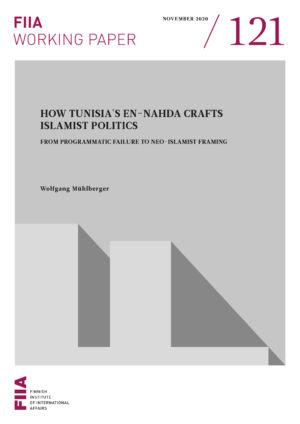 En-Nahda’s participation in Tunisia’s post-revolutionary politics triggered an adaptive process, reflecting a transition from theoretical elaborations to political practice. Switching from clandestine regime opposition to engagement in an emerging pluralistic system also puts to the test the grand narrative that defines the movement’s rationale and intends to captivate the party’s potential constituency. After five years in the game, assuming a tainted Islamist label and somehow acknowledging programmatic failure, the party’s leadership proposed a neo-Islamist framing, ‘Muslim democracy’, in 2016. This semantic operation aims to fuse two schools of thought, a confessional and a political one, with historically distinct governance systems and political cultures. Hence, despite this twist in rhetoric, a major challenge for En-Nahda remains the reconciliation of its utilitarian take on democratic procedures with its deep-rooted reference to Islamic principles. Yet while continuing to stress its readiness for concessions, supposedly in order to save Tunisia’s democratic transition, En-Nahda’s political programme, practice and narrative remain flawed, fluid and unconvincing respectively, eroding its credibility and incrementally reducing its mobilisation capacity.

Tunisia’s magic reform bullet? Decentralisation is being developed to upend the legacy of a highly centralised state