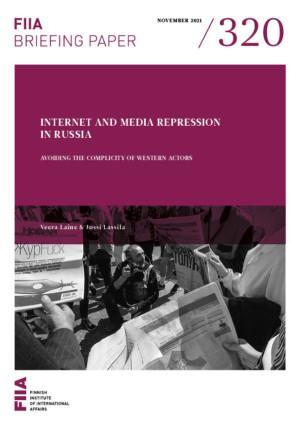 Media control has been a key part of Vladimir Putin’s exercise of power. Recently, however, the repression of freedom of expression has taken both a quantitative and a qualitative turn for the worse. The political leadership now perceives independent media as a threat in itself, and is applying comprehensive control over media outlets and even individual journalists.

In particular, declarations about the media and journalists being ʻforeign agentsʼ have increased sharply. Such repression drives journalists and the media to leave the country. Internet-enabled journalism from exile has duly become an important part of independent media.

The growing importance of the internet, largely connected to Western platforms, and the diminishing role of state-run television in the face of multiple popular grievances, are key reasons for the regimeʼs accelerated repression.

Under these difficult circumstances, the readiness of internet giants to censor political content on the basis of their commercial interests further restricts the information space in Russia, and therefore needs to be resisted.