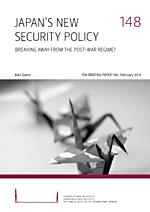 China is challenging the regional balance of power in East Asia through a military buildup and an increasingly assertive foreign policy. The US is forced to find the right balance between cooperating with China while benefiting from its economic rise, and countering China’s regional reach by carrying out its self-declared “pivot” to Asia in spite of domestic and budgetary constraints.

With just over one year in office, Japan’s Prime Minister Shinzō Abe has received wide domestic support for his ambitious plans to revive Japan’s economy through his threefold policy of Abenomics. At the same time, however, he has implemented a number of significant policies in the defence and security sphere.

In response to China’s military rise, the Abe administration increased and recalibrated the defence budget. Furthermore, in order to reinforce the alliance with the US, the government approved the creation of a US-style National Security Council, passed a Secrecy Bill, and aims to reverse Japan’s self-imposed ban on exercising the right to collective self-defence.

Under the banner of “proactive pacifism”, the Abe cabinet is seizing the momentum caused by the changing regional power dynamics in order to edge closer towards “breaking away from the postwar regime”. A proposed revision of Japan’s constitution, unchanged since 1947, symbolizes the ruling Liberal Democratic Party’s (LDP) objective to bring about a more autonomous role for Japan both in the security alliance with the US and as an international actor.