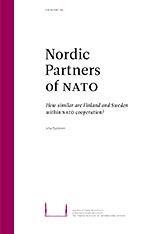 Since the establishment of the Partnership for Peace in 1994, Finland and Sweden have shared the role of the most active partners of NATO. At the military level, the ultimate goals of the NATO partnership programmes are to support partners in their efforts to reform their national defence structures and to assist them in developing their national capabilities according to NATO standards. These goals are subject to two prerequisites: well-prepared and stand-out applicants for membership, and qualified military capabilities for operations. Finland and Sweden have met every expectation pertaining to capabilities, but have refrained from becoming members of the Alliance.

However, both the Alliance and the partnerships have transformed since the 1990s. Twelve former partners are now members of the Alliance, and the remaining partners differ from each other regarding their background as well as political and military ambitions.

This FIIA Report describes and compares the two Nordic partners, Finland and Sweden, within the context of their military cooperation with NATO. The emerging trend in the Baltic Sea region is defending one’s territory, and with increasingly similar perspectives on threats, and more cooperative ways to respond to them, the Nordic partners could gravitate closer towards each other, and towards NATO. This vision of a commonly shared defence paradigm of ‘adequate’ defence capabilities would lower the threshold for deeper defence cooperation between the two Nordic partners and NATO.