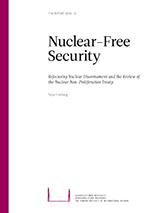 The abolition of nuclear weapons is back on the agenda. After years of standstill nuclear disarmament is taking place, but not at a pace acceptable to the non-nuclear nations. At the 2010 Review Conference on the Nuclear Non-Proliferation Treaty concrete progress is wanted on issues such as the nuclear test ban and the production of fissile material. The most critical issue at the conference will be the proposal for a nuclear-weapon-free zone in the Middle East. Is progress possible? The U.S. and Egypt will have the answer.