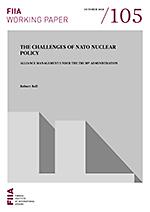 In no aspect of NATO’s deterrence and defense posture is the challenge of Alliance management more demanding than in its nuclear dimension. This is especially the case at a time when Russia’s aggressive actions and threatening behavior have fundamentally changed the security environment in Europe, and President Donald Trump’s approach to NATO has presented challenges of its own.

In this context, it is crucial that Allies understand the positions that they have agreed on in terms of arms control, disarmament and non-proliferation (ADN), as well as nuclear weapons policy, doctrine and posture.

Considering the security benefits they receive in return for the United States’ extension of its nuclear deterrent to its NATO Allies, these states must also distinguish between the nuclear-related roles and responsibilities they are expected to take on and those with regard to which they have the option to ‘opt out’.

For its part, the Trump Administration must appreciate that if all Allies are expected to close ranks behind the enhancements to NATO’s nuclear posture that are needed in order to respond to Russia’s threatening behavior, many will require an equally robust arms control, disarmament and non-proliferation posture as a quid pro quo.

Nuclear-free security: Refocusing nuclear disarmament and the review of the Nuclear Non-Proliferation Treaty