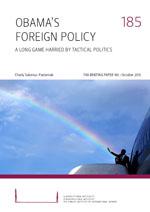 President Barack Obama’s foreign policy has focused on achieving strategic aims, but it has been bedevilled by inconsistent implementation and harried by tactical politics. As a president, Obama has addressed and delivered successes in the five central goals he outlined as a candidate in 2008.

While Europe was treated largely with disinterest during the first Obama administration, Russia’s actions have served as a reminder that the US has deep security commitments in Europe which every president must uphold. Moreover, Obama’s emphasis on the need for an economic alliance in the form of the Transatlantic Trade and Investment Partnership (TTIP) is a reminder that the transatlantic relationship is viewed as central in the 21st century.