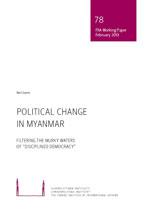 The recent transformation in Myanmar has brushed up the country’s international status and image, and Western and Asian countries alike are eager to reap the benefits of the ongoing changes, but the economy and financial sectors are in dire need of reform.

In order to increase the awareness for further reforms, Western input is vital. Given the fact that the EU has always been a strong economic player in Myanmar and in East Asia in general, it is in a position to offer important incentives for further change by increasing development aid, rewarding gradual political reform, and investing in joint ventures while taking into account social responsibilities.

The greatest challenge likely lies in Myanmar’s continuing ethnic tensions. Here the EU can offer expertise on conflict mediation and capacity-building, acting as a “middle power” or regional stabilizer.

In spite of these remaining challenges, the ongoing gradual reforms are more than a cosmetic contrivance for Western consumption, and are likely to continue. Current key actors in the ruling USDP party have been groomed for a future role as civilian leaders in the “discipline-flourishing democracy”, and are reform-minded. The national elections in 2015 will reveal to what extent the ruling elite is genuinely dedicated to further democratization.

True democracy in the Western sense will require substantial changes in the constitution. This, however, is impossible without the support of the military and will therefore likely be a lengthy process.