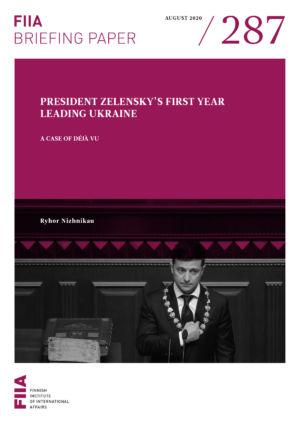 During his first year as President of Ukraine, Volodymyr Zelensky prioritized presidential power-building. In order to do so, he relied heavily on the old system and established practices, such as “hands-on” management and the personalization of state agencies.

Institution-building was replaced by the targeted fine-tuning of the dominant system. Some important reforms launched by the government in autumn 2019 were later stalled and reversed. As before, the adoption and implementation of comprehensive reforms will largely depend on Western pressure and conditionality.

The major problem is that there are multiple centres of power in the country and the president’s actions only produce an illusion of control, while in reality the system is fragile and unstable.

During the rest of his presidency, Volodymyr Zelensky will increasingly depend on oligarchs and govern through situational alliances. In exchange for their support, he may have to acquiesce to their continued dominance over the economy and the restoration of their influence in politics. Instability will intensify as his personal popularity wanes and economic and political crises deepen.