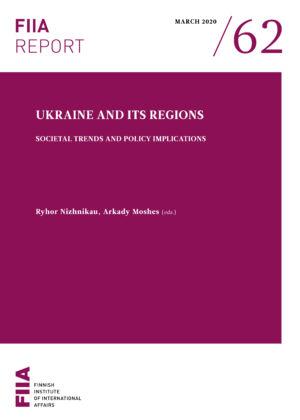 Since the Euromaidan Revolution, self-identification and attitudes within Ukrainian society have changed profoundly. This report takes stock of the identity changes both nationwide and in three major oblasts, namely Lviv, Kharkiv and Odesa, representing in this study the Western, Eastern and Southern regions of the country respectively, to identify new differences and unity points.

To this end, the report focuses on two major issues, looking firstly at the trajectory of the identity shifts nationwide and in three key regions, and secondly, at their political effects. The question of the sustainability of the changes is also addressed.

Taking the regional aspect into consideration is crucial given that cleavages have traditionally had a visible regional pattern, and that the identity shifts coincide with a realignment of centre-periphery relations within the context of the ongoing reforms, particularly decentralization. The report also furthers understanding of the potential risks – or lack thereof – of this process for the Ukrainian state.

This publication is part of a research project “Ukraine after Euromaidan” conducted by the Finnish Institute of International Affairs. The project is implemented with the financial support of the Nordic Council of Ministers 2020.

The Normandy Summit on Ukraine: no winners, no losers, to be continued

Ukraine’s stalled transformation: A concerning context for the 2019 presidential and parliamentary elections