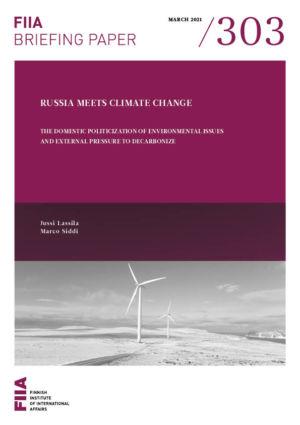 Russia’s role in international climate policy is central. Russia is the fourth largest emitter of carbon dioxide and has vast potential for developing renewable energy. However, its fossil fuel-based economy and the legitimacy it creates for the Kremlin make climate action inherently difficult.

Thanks to the growing politicization of environmental issues, the relevance of climate change may increase in the Russian public debate. The effects of climate change, such as melting permafrost and the Siberian forest fires, could catalyze this process.

Climate-sceptical populism may sometimes feature in the rhetoric of the political elite, but its proliferation in society is unlikely. Most Russians are concerned about climate change, even if less so than Western Europeans. However, Russia’s decision-making on climate policy is highly centralized, with little or no input from civil society actors.

The energy transition in Europe can eventually deprive Russia of its main market for fossil fuel exports, but it also creates new prospects for cooperation in green energy development.