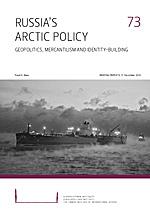 Russia has re-evaluated the risks of geopolitical competition in the Far North and now prefers a pattern of balanced cooperative behaviour, as exemplified by the maritime border agreement with Norway.

This cooperative track fulfils Russia’s ambitions only to a degree, so Moscow will try to limit globalization of the Arctic, insisting on the privileges of the littoral states and prioritizing ties among the ‘Arctic five’.

Development of the hydrocarbon reserves, particularly off-shore, requires the engagement of Western partners, who remain reluctant to invest due to a poor investment climate and considerable uncertainty over demand, while Gazprom and Rosneft are also in no hurry to launch new projects.

The main factor undercutting Russia’s plans and ambitions for the Arctic in the mid-term would be the scarcity of resources determined by the slow recovery from the massive economic crisis.

Russian Arctic sanctioned: Western measures against oil projects do not signify the geoeconomic importance of the region