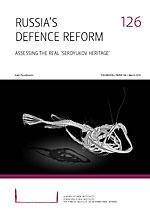 The Russian Armed Forces are undergoing a long and expensive reform, which aims at preparing the country to new security threats. The reforms were initiated during the term of the former minister of defence, Anatoly Serdyukov. His dismissal in November 2012 initiated a debate on the future of the reforms.

As of yet, the changes made by the new minister of defence Sergei Shoigu are corrections to the existing plan, and not an overall revision of its contours. The most pronounced difference is a shift in favour of domestic military industry.

In its current condition, Russia’s defence industry is not able to absorb the major increase in military spending in an efficient manner. From the technological and managerial perspectives, most of the military-industrial enterprises function far below the international average.