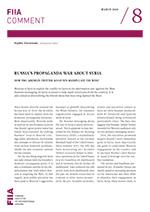 Moscow is keen to exploit the conflict in Syria in its information war against the West. Russian messaging on Syria is meant to help expel Americans from the country. It is also aimed at discrediting the liberal ideas that have long defined the West.

Fog of Falsehood: Russian Strategy of Deception and the Conflict in Ukraine