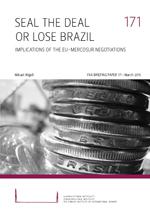 The EU seems to be dragging its feet in the negotiations for a free trade agreement with Mercosur. It urgently needs to revive the process.

The time is now ripe for reaching a deal. Mercosur is ready for the exchange of market offers, reflecting the fact that Brazil wants to speed up the negotiations.

The broader geostrategic implications of an EU-Mercosur agreement have been neglected in the European debate. Not only would an agreement help the EU revive its presence and influence in South America, but it would also strengthen Brazil’s stake in the liberal world order.

If the EU fails to act, Mercosur will likely turn elsewhere and become a more difficult partner to negotiate with.

Any hopes the EU may currently have of Brazil breaking free from the Mercosur format to negotiate a separate deal are misplaced. Despite the pressure on Brazil to open up for more trade, it is unlikely to want to risk its position as a regional leader by negotiating alone with the EU.

The WTO Under Pressure: Tackling the deadlock in multilateral trade