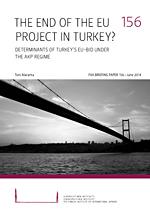 Ever since the founding of the Republic in 1923, the idea of making Turkey a European country has been a major component of the nation-building project, although Europe has also been perceived as a threat.

The incumbent Justice and Development Party (AKP) embarked on an EU-inspired reform project at first, but has subsequently taken an increasingly anti-European position.

Turkey’s EU bid under the AKP government needs to be seen within the context of the domestic power struggle, whose origins can be traced to two opposing modernization alternatives: radical and Islamic.

Within the domestic power struggle, the AKP has used the EU process as a tool to de-legitimize the secularist state elite-lite, composed of the armed forces and the judiciary.

After having consolidated its hegemony, the AKP abandoned its EU aspirations, and there is currently very little societal pressure from the AKP constituency to continue the EU reforms.