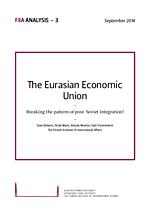 The Eurasian Economic Union between Belarus, Kazakhstan and Russia consolidates a market of 170 million people with a combined GDP of almost 3 trillion US dollars. On paper, this union has the potential to transform economic relations in the region and to offer an alternative to the EU in the post-Soviet space.

The Union, which comes into effect from January 2015, marks the latest achievement in the current ‘intensive phase’ of integration, which has seen the creation of a Eurasian Customs Union (2010), a Single Economic Space (2012) and a Eurasian Economic Commission (2012), all intended to facilitate the four economic freedoms – the free movement of goods, people, services and capital. Expanding the Union is also seen as a priority, with Armenia set to join the Customs Union and Kyrgyzstan already at an advanced stage of negotiation.

However, despite early successes, further deepening and widening of the Union are fraught with difficulties and the pace of integration will inevitably slow, as member states come to terms with the commitments they have made. Plans to deepen the Union have encountered a number of implementation issues leading to multi-speed integration from the outset. Likewise, plans to expand the Union have revealed a creeping politicisation that threatens to undermine the ‘economic only’ nature of this integration project.

More importantly, the latest phase of post-Soviet integration shows strong signs that the older problems of weak institutions and large asymmetry between member states are continuing to hinder closer ties. Taken together, and against the backdrop of an increasingly hostile international environment that has accompanied the crisis in Ukraine, the Eurasian Economic Union faces an uphill struggle to maintain momentum and deliver the results member states desire.

The Eastern Partnership after the Riga summit: Avoiding the path of least resistance