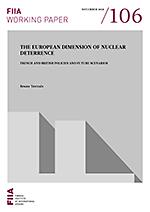 While the idea of a “European nuclear deterrent” has a long history, it has recently made a comeback in the light of Russian aggression on the continent, growing tensions in the transatlantic relationship since the election of Donald Trump, as well as the British decision to leave the European Union. Voices are being heard in Germany in particular, arguing for stronger European nuclear autonomy.

This paper analyses how the French and British deterrents could play a broader and stronger role in ensuring the security of the continent. Discarding the idea of a single “European deterrent”, it suggests possible credible pathways to enhance European nuclear cooperation based on French and possibly British forces, preferably outside the EU context. Furthermore, it suggests that future US decisions and policies towards Europe will be a critical factor in defining the range of realistic scenarios and outcomes.