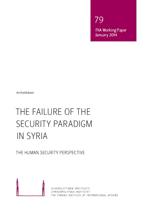 Few would dispute the assertion that human security has failed in Syria. Authoritarian regimes in the Arab world have had well-documented deficits in human security emerging from coercive internal politics, a lack of respect for human rights such as freedom of expression, and limited freedom from fear and want.

The concept of human security has developed mainly within the domain of UN development policy, but it has also made headway in security policy, being advocated as one approach in international crisis management and peacekeeping. Less attention has been paid to its adaptability in forming the basis for the internal security policy of any given state.

The main argument of this paper is that human security principles can be the cornerstones of state security, potentially preventing, mitigating, and remedying security issues within a state that could lead to societal upheaval.

The argument is presented by outlining some major developments in the history of modern Syria up to its present state of civil war. The paper shows that the security paradigm exercised in Syria has led to a double failure in which human insecurity has resulted in turmoil for ordinary people and has shattered the authoritarian governance. The paper suggests that the rebuilding of security sectors must be based on the principles of human security, not only in Syria but also in the Arab world at large.