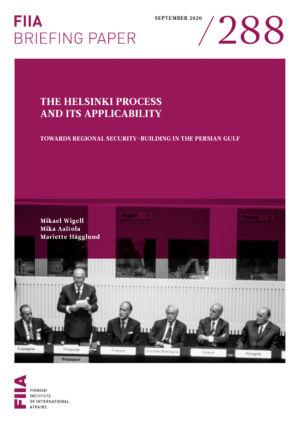 The idea of a ‘Middle East Helsinki Process’ has been raised as a potential collective security mechanism to help avoid major political regressions and violent spirals.

The Helsinki Process, known for reducing tensions between the Soviet Union and the West in the 1970s, can provide some useful lessons, but the region will have to develop its own model by drawing on past experiences and the region-specific threat perceptions and political needs.

Non-interference, sovereignty and the protection of religious rights could serve as useful starting principles for regional security-building in the Middle East.

Drawing on the lessons learnt from the Helsinki Process, specific recommendations for a possible Middle East Process would be as follows: i) establish a regional initiative for building a security architecture in the Persian Gulf inspired by the Helsinki Process and its institutionalization; ii) establish a channel for Track 1, state-to-state-level consultations; iii) focus on the basic security guarantees that are common to the Persian Gulf states; and iv) maximize regional ownership, but with external facilitation.

Political narratives in the Middle East and North Africa: Conceptions of order and perceptions of instability