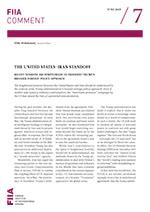 The heightened tensions between the United States and Iran should be understood in the context of the Trump administration’s broader foreign policy approach. Even if neither side wants a military confrontation, the “maximum pressure” campaign by the US has raised the risk of a potential miscalculation.