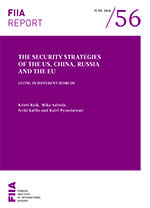 This report analyzes and compares the security strategies of four major international actors: the United States, China, Russia and the European Union. The rules-based liberal international order is increasingly under strain due to tightening geopolitical competition and the decline of the Western hegemony. In this context, the report explores the conceptions of the four major powers with regard to the world order, the self-defined position of each actor in it, and their possible aspirations to change the existing order. Furthermore, the report analyzes how each strategy defines security threats and risks, as well as ways to address these threats.

The report highlights the ongoing rapid change of global structures and instruments of power as a challenge addressed in all four strategies. Increased competition is visible not only in the field of military power, but also in economic relations and at the level of values. While the US strategy defines Russia and China as key adversaries whose increasing influence is to be contained, both Russia and China correspondingly aim at building a counterweight to the US power in a multipolar world. Among the four actors, only the EU maintains a strong commitment to the rules-based order and explicitly rejects a worldview centred around zero-sum rivalry between great powers.