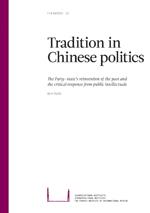 This study discusses the role of history and tradition in the legitimization of the state in the People’s Republic of China. In Chinese political debate, history has traditionally been the most important source of argumentation. Today, the Party-state is reinventing history and tradition to bolster its legitimacy, but the project has met with opposition. This study introduces and analyzes the related debate, ongoing among various actors in different public fora in China, and engaged in both by those affiliated with the Partystate and those outside the establishment.

This discussion is particularly relevant because of wide agreement that there is a spiritual vacuum in China today. Communism no longer provides the foundation for values as China has, in effect, become a wholly capitalist economy. Th is weakens the legitimacy of the ruling party and even endangers unity, which is the central concept in the Chinese political creed.

To remedy this, the Party-state has started promoting so-called Traditional Learning, values embedded deep in Chinese culture, in order to repair the chinks in their rusting spiritual-ideological armour. Confucianism is often seen as synonymous with Chinese traditional culture and ethics, and therefore Confucianism plays a central role in the related discussion. It is unfortunate for the Partystate, however, that depending on its interpretation, Confucianism can be used both to support and oppose unity.

What we understand by ‘China’ today—a unified state with an area equal to Europe and inhabited by the Chinese—is a recent construct dating back no more than two centuries. The Party-state has a greater need to anchor its role in history than any other preceding ‘dynasty’, which could all be seen as parts of the same continuum of imperial China. Therefore, the Party-state is particularly keen to present itself as the torch-bearer of Traditional Learning.

The concept of ‘political religion’ aptly describes the role that the Communist Party ideology used to play. It seems that the Party state is striving to establish such an ideology once again. This study discusses the feasibility of that quest, especially in light of the many strikingly different voices which may be heard in the debate related to the revival of Traditional Learning and, in particular, Confucianism.

Yet another ‘historic’ meeting between Mainland China and Taiwan: The two sides are talking on a governmental level but there is no cause for celebration