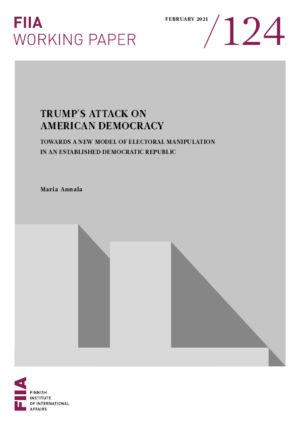 In 2020, President of the United States Donald Trump launched an unprecedented electoral manipulation campaign in an attempt to secure himself a second term in office regardless of what voters decided.

This Working Paper seeks to answer three questions: What electoral manipulation methods did Trump use? In what ways were his methods similar to those used previously by other incumbents to interfere with elections in their respective countries? And in what ways did his methods resemble those of election meddling by foreign state actors? To answer the aforesaid questions, this paper seeks to develop a model to describe Trump’s electoral manipulation campaign.

While most of the methods were not new, their combination was unique. That was to be expected, as Trump was the first 21st century incumbent in a well-established Western democracy to undertake such a massive electoral manipulation campaign.

President Joe Biden and the restoration of US global leadership: Turning the tide?

Covid-19 pandemic threatens US elections: The pandemic adds significantly to the risk of a contested result and a constitutional crisis