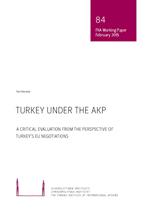 Turkish social science research has been steeped in interpretations according to which Turkey’s 20th century political history is marked by an uneven struggle between an “omnipotent Kemalist state” and a rather powerless society. This argument has been very coherently used by the governing Justice and Development Party (Adalet ve Kalkınma Partisi, AKP) in its articulation of the (Kemalist) Westernizer as the “domestic other”.

This paper argues that Turkey’s European Union membership negotiation process under the current AKP regime can only be adequately explained based on these premises. Turkey’s EU accession negotiations started in October 2005, six years after the EU had confirmed the country’s official candidate status. As of the beginning of 2015, only one of the 35 negotiation chapters has been completed. Thus, as the tenth anniversary of the kick-off of the accession negotiations is approaching, it is an appropriate time to ask some very basic questions concerning its nature. The present working paper tackles this issue by concentrating on the following questions: What is the nature of the AKP as a political movement, and how best to evaluate Turkey’s EU bid under its rule?

The paper first presents a Western view of Turkey that has been widely held during the last decade. This is followed by a short summary of the main factors that induced the EU to start official membership negotiations with Turkey. After this, the AKP’s attempt to destroy what its leadership asserts is the old Kemalist regime and replace it with a “New Turkey” is evaluated. This evaluation leads to an outline of the main factors behind the AKP’s EU accession negotiations.

The paper argues that it is highly unlikely that the AKP can ever establish a workable liberal democracy in Turkey. A further observation directly following on from this is that the AKP regime will never be able to fulfil Turkey’s EU aspirations. The dominant image of Turkey as a European country firmly in the Western camp no longer corresponds with reality. Internally, the current regime believes that Turkey’s Westernization has been a degenerating process – a historical mistake – that has now been annihilated. As the internal state legitimation no longer requires anchoring Turkey to the West, but rather making the West a counter-image, a radical redefinition of Turkey’s national interests and position in the world has come about.

The end of the EU project in Turkey? Determinants of Turkey’s EU bid under the AKP regime