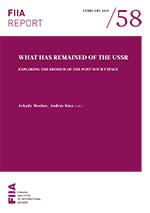 Almost three decades have passed since the dissolution of the Soviet Union. In the meantime, a whole new generation has grown up with no personal memory of the Soviet era. However, the disintegration of a former superpower cannot happen in such a manner that its heritage disappears without a trace.

The aim of this report is to take stock of the process of erosion in the post-Soviet space that has been going on since the break-up of the Soviet Union in 1991. The authors analyse the remaining material and other structural legacies of the USSR to find out, among other things, whether re-integration of the post-Soviet space, or a part thereof, around Russia is still possible and what kind of centrifugal and centripetal forces are still at play.

The authors approach the research questions from the perspective of cross-cutting issues that encompass the region as a whole. The aim is not to study how the post-Soviet states are faring almost three decades after the transition. Instead, the focus is on key themes such as defence relations, energy and economic ties, as well as on various efforts to create integration structures that would again unite at least parts of the region.

The report is divided into three thematic parts. The first part concerns the structural issues of post-Soviet politics and policies. The second part comprises two studies dealing with the economic ties that still exist among the countries of the former Soviet Union. The third part deals with the societal aspects of the question.