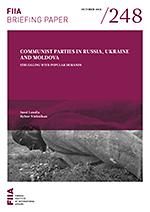 The appeal of left-leaning ideas is on the rise in Russia, Ukraine and Moldova. Nonetheless, the main left-wing parties, particularly the communists, remain stuck in the past and at odds with the interests of the electorate.

The communists have gradually transformed from opposition forces and political competitors into conformists of the ruling elites. This new function dictates their key interest in maintaining the stability of the system, which also leads to growing dissent among the parties’ members.

Embeddedness in the existing political system is preventing the Left from self-reforming and impeding their transformation into modern national social-democratic projects. Yet Moldova has shown that in the new political context old ‘Leninists’ can reinvent themselves and become the most popular political project in the country.

Moldova deserves more from the EU: Moldova has passed Ukraine on the European track, but political instability endangers the achievements of past years.

Another try for Ukraine and Europe: Tensions between the EU and Russia continue as Ukraine aims to build a functioning European state