Europe’s economy is struggling because of the European financial crisis. At the same time, increasing global competition urges Europe to get its act together sooner rather than later. That is, to reinforce the Economic and Monetary Union, complete the Single Market and advance innovation and competitiveness. The years of crisis have however opened up some old wounds and established new political dividing lines in Europe. What are the prospects of finding a common economic and political future for Europe?

Dr Alexander Stubb, the Minister for European Affairs and Foreign Trade of Finland

Director Teija Tiilikainen from the Finnish Institute of International Affairs opened the seminar addressing Europe’s future and welcomed the audience and the speakers. The seminar had perspectives from the south, Portugal, and from the north, Finland, with regard to what the prospects of finding a common economic and political future for Europe are, as Europe is recovering from the economic and financial crisis.

Dr Bruno Maçães, the State Secretary of EU Affairs of Portugal, said it was a great pleasure and an honour to be speaking at the FIIA-organised event. From the Portuguese government’s point of view, the Eurozone crisis has two different parts, a fiscal crisis and an economic crisis. Fiscal discipline is a necessity he said, the crucial question being debt dynamics. If it is in control, the fiscal question is in control. With regard to the fiscal question, for example Japan has a high level of public debt and yet the country is doing well. Part of the problem in Europe is separating the fiscal question from the economic question, he stated. Portuguese companies suffer from higher taxes and have limited access to credit and have to pay a much higher premium in credit markets, because the country is suffering in the fiscal markets. Companies shouldn’t be limited because of their geographic location, he commented. The normal workings of an economy should be separated from the political fiscal questions, said Dr Maçães. The fiscal questions should be addressed, but separated, and the whole economy of a member state should not be held hostage because of the fiscal questions. It will take one or two decades for Portugal’s debt levels to come down, and the economy should not be held down for that whole time, he stressed. He also said that the fiscal should also be a main concern for the parties on the left, if it is wanted for the mechanism of the welfare state to function well, otherwise it is at the mercy of financial markets. To have the financial markets separated from governments should be done more that it is now in Europe, he said. The financial and political systems are closer in Europe than they are in the US for example. Part of the idea of the banking union is to break these close ties. Also the fundamental markets of an economy, energy, digital, financial, and transport should be integrated in Europe. According to Dr Maçães, this is crucial for jobs and for the economy. This is true both for crisis countries as well as countries that are doing better. Investment is too low in Europe, and synergy and economies of scale are not able to work because of this. Europe should come in in the economic question with the banking union and integrated markets, but the EU should not take the fiscal role of a nation state. The economic question is better addressed at the European level, but with the fiscal question we should be careful with how much is taken to the European level. The fiscal and economic questions are separate questions, and the economic question can only be addressed fully if it is separated from the fiscal question, Dr Maçães said in conclusion.

Dr Alexander Stubb, the Minister for European Affairs and Foreign Trade of Finland, thanked Dr Maçães for a brilliant presentation. Minister Stubb started his own presentation by saying that it has been forgotten that the EU was all about political and economic convergence, a political union that used economic instruments like the Single Market and the customs union and coherent structural policy. In the midst of crisis, this and the historical past of the continent should not be forgotten, he said. This positive development has now been reversed and divergence and division is ongoing. Europe is being split into Eurozone/non-Eurozone, north/south. The ”Berlin Wall” should not be re-created, and these divides should not be made, he said, and reminded that not so long ago Spain, Portugal and Eastern Europe were not democracies. Minister Stubb called for the creation of convergence, to bridge the political and economic gap. What should be done and is needed is convergence of values, of competitiveness and of welfare.

This return to European convergence requires of course solutions to the economic crisis. Stabilising the European economy has been a remarkable achievement, Minister Stubb said. Many things have been done, new measures approved and implemented, for example the existential issue of the euro no longer exists. No one had a manual for the crisis, and for the past five years we have been plugging holes as we go along, he said. Regarding programs in different crisis countries, Ireland is getting back in the market, and the latest figures for example for the Spanish economy also look positive, he pointed out. For Portugal, it is hard to say yet but latest figures do not look bad. He also expressed disappointment at the debate in Finland regarding the role of Finnish taxpayers in funding EU bailouts, which he said overstated the financial liability placed on the Finnish taxpayer. Stabilisation does not mean however that the crisis is over, he noted. Though many changes have been made and 70% of the needed institutional steps have been taken for the necessity of structural reform and cutting the trend of debt, Europe still needs to look at ways to improve growth. Consolidation is essential for improving economic growth. For Minister Stubb this means making economic reforms within the member states, focusing on the internal market, the single European market, and promoting free trade. The public sector, the governments or the EU cannot be sources of growth, which is created by entrepreneurs, and there should be legislations that do not prevent growth, Minister Stubb said. He agreed with Dr Maçães that more investment, especially foreign direct investment is needed in Europe, and better regulation that facilitates for Europe to be a better place for business. Much needs to be done in terms of economic reform and structural change. For the future, Minister Stubb believed that the EU elections next spring, 25 May in Finland, will be the most important and interesting elections seen so far. He believes that the voting percentage will grow and that the issues discussed will be European rather than local or national. It will also be interesting to see how economic and fiscal issues play into the elections, he said. Furthermore, he called on Finnish stakeholders to better understand the strengthened role of the European Parliament in EU decision-making post-Lisbon, and the need to lobby effectively in the Parliament. In his conclusion Minister Stubb stressed the need to bridge the economic and political gap inside the EU, and the need to be careful not to turn inward as Europe, or as a nation state, and to remember that the foundation of the EU is convergence.

In the discussion part Director Tiilikainen asked the speakers with regard to learning from past mistakes, if the Maastricht treaty would be concluded now, what would be different and what the speakers would do differently if they had it in front of them today. Minister Stubb commented that it was a product of its time and may have done nothing differently. The treaty was birthed out of the Cold War with two far-reaching enlargements , with a monetary union rather than economic union. It is impossible to have full economic union in the EU, he said. Dr Maçães commented that it was a mistake not to think of a banking union right at the start, to have a common currency without it is a contradiction in terms, single monetary policy needs a single market he said. But he also said that institutional and political processes are always messy, and it is normal that enlargements create problems. In the end it works well, he said. It was also asked whether there are any significant steps to a political union with efforts to the monetary union perhaps aggravating a political union as well. Dr Maçães commented that a monetary union is also a political union. But he said also that the nation state should not be replicated at the European level, it should be something different and better. Nation state is about homogenisation, and in Europe there should be room to think in different ways, but it is also at the same time a political union. Minister Stubb commented that the EU was created because the nation state failed and created wars, and to protect the individual from the state. He also said that the EU will always be more than an international organisation, but will also always be less than a nation state. At the end of the day he believes in the deepening integration of the Eurozone, but does not think that a detached political union would come to be. There was also discussion on the anti-European movements to which Dr Maçães commented that national prejudices and interest group politics affect these. Minister Stubb said that in the EU parliament there are anti-Europeans both on the left and right, and in the elections their number might increase somewhat. But only 90 out of 770 MEPs are anti-European so it is still inherently pro-European. Dr Tiilikainen also asked about differentiated integration, will the EU institutions be divided to support the EMU. Minister Stubb replied that he does not see a separate finance ministry akin to EEAS happening anytime soon, but it could be a development. To a question on solidarity between the crisis countries, Dr Maçães commented that the crisis has shown that the level of commitment people have in Europe to the euro runs deep. 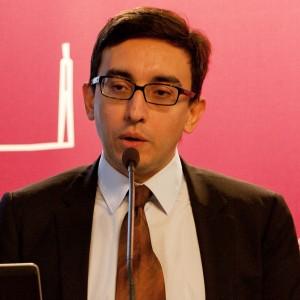 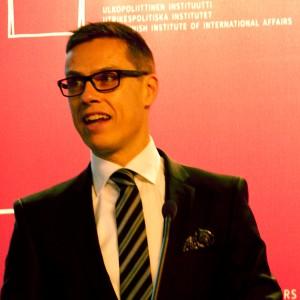 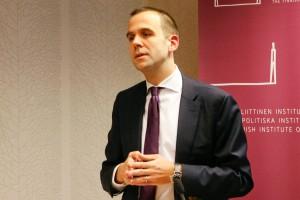