The Copenhagen climate summit, the most anticipated UN climate meeting in history, ended with a vague political declaration, short on substance and ambiguous in its legal status. Kristian Tangen, Senior Adviser to the Finnish Institute of International Affairs, and co-founder of Point Carbon, discusses the Copenhagen outcome and its implications for the future of the global response to climate change and the development of global carbon markets. Responses from the panel of policy and market analysts will be followed by an open discussion.

Mr. Tangen is Senior Partner and Director of Point Carbon and a specialist on the political and market
aspects of the Kyoto Protocol. He has followed the Kyoto process closely from its starting phase and
has published numerous papers and analyses on a variety of political and corporate issues concerning
emissions trading, climate change, the Kyoto Protocol, and other environmental issues.

Mr. Ruokonen is a leading carbon market expert in Northern Europe and has over eight years professional experience in carbon markets and international climate policy. He has been following and analysing the EU ETS and the Kyoto mechanisms since 2002 and is GreenStream’s leading market analyst.

Mr. Vihma works as a researcher at the Finnish Institute of International Affairs. He specializes in global
climate governance and questions of effectiveness and legitimacy. He has a special interest in the UNFCCC
negotiations, which he follows closely, and in the climate policies of developing countries.

The seminar was opened by Dr Anna Korppoo, Programme Director of the UPI-FIIA research programme on the International Politics of the Environment and Natural Resources, who introduced the speakers and warmly welcomed the audience to the seminar.

Kristian Tangen began his presentation by giving an outline of the December 2009 Copenhagen Summit and giving context, before moving on to discuss the outcomes and repercussions for the market. Copenhagen was widely held to be the most chaotic COP ever, with an unprecedented 35,000 accredited and no capacity to handle this. The summit also suffered from inept Danish leadership and alongside this there were strong protests against the US and the perceived lack of progress.

Copenhagen outcomes – as many expected, a political agreement setting a two degree warming limit was announced. In addition, the basis for a pledge and review system under the convention was set, a REDD mechanism (avoiding deforestation) was adopted, together with voluntary financial pledges. Also as expected, there was no clarity on national targets. Beyond this, there were outcomes that went beyond expectations: all key emitters pledged targets, including developing countries which offered intensity targets. This meant that 78% of global emissions were covered by the Accord. Crucially, reporting on mitigation efforts was agreed to developing countries, opening the door to a transparent regime. Finally, rather ambitious targets for financing were laid out, with funding to developing nations from the developed world to reach 0bn a year by 2020.

On the down side there were also failures in meeting expectations. Firstly the process was messy and the status of the outcome uncertain (the UNFCCC ”took note” of the accord rather than adopting it). No reduction targets were entered into the Accord, and there was too little time to discuss national targets. Aggregated targets were indeed blocked by China and, to a lesser extent, India. A 31 Jan deadline was set for parties to submit targets to the UNFCCC.

Reactions to Copenhagen were varied. In the US the media ­took a ­­­positive view of Obama’s role; whereas the EU saw less than it had hoped for on the table, and thus stayed with its 20% target rather than 30%. According to UK Secretary of State for Energy and Climate Change Ed Miliband China wrecked the process, yet China itself saw the outcome of Copenhagen as a constructive basis for future and publicly slated the EU in response.

The market reaction to Copenhagen saw the EU carbon price fall from €13.50 to just over €12 per ton. Linked to this are the manifestations of lack of progress: the dispute over the future of the Kyoto Protocol; wrangling over procedures; and the debate as to have one or two tracks.

Regarding expected future process, it seems that the grim EU and China relations in the aftermath of Copenhagen will persist, with the EU and countries wanting a ’single legal outcome’ countries will continue to be sidelined for sometime. As it is, the USA and BASIC countries will negotiate a weak implementing agreement under the UNFCCC, and there is much interest in how US-China cooperation will play out. An agreement could well take at least two years with the likely architecture being a pledge-and-review system under Convention. In conclusion, a broad and comprehensive agreement is likely, but will take time to achieve. Regarding the EU, seen against a 2007 baseline, it has the least ambitious pledge – offering to do less than what the current science recommends.

Implications for the market – if an agreement is delayed for 3 years investment in the Clean Development Mechanism will likely to fall, and the world will achieve 1-2 Gigatons less in reductions towards 2020 targets. A significant price increase could expected for EU emission Allowances (EUA) but not for Certified Emission Reductions (CER), as CER price has a wide range than the EUA price because of the import limitations in the EU.

The question was asked as to how and why the speaker believed the EU had the least ambitious targets when compared against 2007, and why 2007 was chosen as the baseline instead of the international reference point of 1990? Mr Tangen responded stating that by using this baseline we can see the amount of burden a party is willing to take on, and that against this baseline the EU target would mean the burden the EU was willing to take on would be smaller than the other Annex I parties.

Juha Ruokonen from Greenstream believed uncertainty surrounding the negotiations is reflected in carbon price trends. Since Copenhagen however, the price recovered already. He emphasised that the carbon market is totally different from other commodity markets. Mr Ruokonen posed the question of whether or not to consider other mechanisms and smaller groupings than UNFCCC. It was stated that investment of US.5 trillion dollars into energy infrastructure was needed for progress, but in conclusion carbon markets here to stay. If uncertainty regarding the UNFCCC process can be removed then there will be a lower carbon price.

Dr Pirja Heiskanen, trained as an economist and Head of the Trading and Industrial Unit at Fortum, gave her comments. She stressed that the power and heat sector holds the key to lots significant reductions. Nuclear and renewable power, as well as Carbon Capture and Storage offered ways forward. As it takes 3-5 years for political decisions and commitments, there remains unpredictability and a true carbon price depends on longer-term political decisions which in turn would provide the impetus for the investment needed.

Antto Vihma offered a political science perspective to the issues of the seminar and discussed the questions of who is to blame for the failures of Copenhagen and what the alternatives to UNFCCC are. Failure in final hours was said to be down to impasse of major players allowing space for rogue obstructionism, but, could this develop into a more regular occurrence? Mr Vihma put forward the opinion that things will move on, even outside of the UNFCCC, but even this progress is because of the UNFCCC, even though it seems like things go nowhere from observers’ point of view.

In the Q&A session the first of many questions put to speaker Kristian Tangen was on the likelihood of the Kyoto Protocol (KP) being killed and which countries committed could walk away? The answer pointed out that there is no expiry date to the KP, so it and its mechanisms will continue unless there is an active decision to get rid of it. If parties have signed, then they are committed. In any case, it would be hard for the EU to walk away from Kyoto, and the same goes for Japan. Russia has an interest in not having its ’hot air’ taken away, whilst the Ukraine wants to benefit from Joint Implementation schemes.

During the presentation the price of carbon in the EU Emissions Trading Scheme was projected to be around €26-40 in 2016 whilst being €13.30 now. The question was thus: Why the upward trend? Mr Ruokonen responded that companies are selling surpluses now, but in the long-term, there is a shortage of allowances. Next, the panel was asked about the role of Africa in climate negotiations. Mr Vihma gave a quick overview, informing the audience that Africa in the last year or two has been trying to form a common stance, but the diversity between the nations – least developed nations, oil-exporting states, and a BASIC group member – made this very difficult. On the whole, Africa needs to work on mostly adaptation and secure the support for this.

The final question looked at Post-COP15 issues. As some countries, such as China, don’t want a legally-binding deal, and the US won’t go for such an agreement until it’s got something through Congress, have we backed ourselves into a cul-de-sac and will we recognise it as such? The panel responded by offering their insights into the negotiations process and also stressed that, going forward, an MRV (Measurable, Reportable, and Verifiable) regime is fundamentally necessary or any agreement would be worthless. 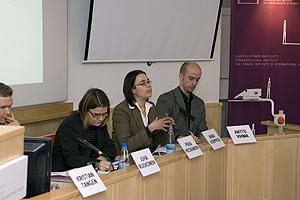 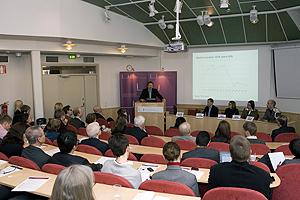 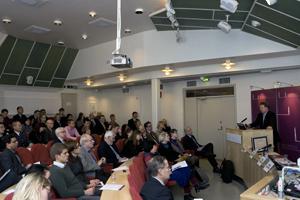 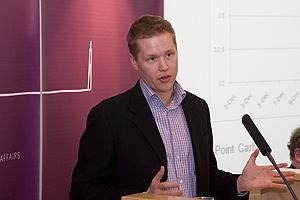 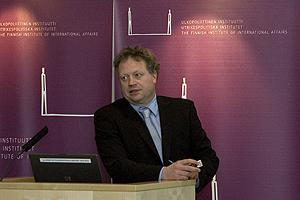