In 2008, the European Security and Defence Policy (ESDP) reaches a major milestone: it was ten years ago, in 1998, that the process of European defence integration started with the St Malo Declaration. And it is moving forward. Or is it? Where do we go from here? The Lisbon Treaty presents new opportunities and challenges: will the new mechanisms allow the EU decidedly to advance towards a common defence policy for a ’secure Europe in a better world’?

Professor Howorth acts as a Jean Monnet Professor of European Politics at Bath University, and Visiting Professor of Political Science at Yale University. His recent books include: Security and Defence Policy in the European Union, 2007; Defending Europe: the EU, NATO and the Quest for European Autonomy, 2003 (edited with John Keeler); and European Integration and Defence: the Ultimate Challenge?, 2000.

Dr Forsberg is Professor of World Politics at the Department of Political Science of the University of Helsinki. He focuses his research on European security, NATO and Finnish foreign and security policy. His recent publications include Divided West: European Security and Transatlantic Relationship, 2006 (with Graeme Herd).

Organized in honor of the decennial of the St. Malo Declaration, this FIIA seminar sought to examine the European Security and Defense Policy (ESDP) in light of the future; from where does the ESDP go from here? As keynote speaker was Professor Jolyon Howorth of Yale University, with Professor Tuomas Forsberg of the University of Helsinki providing comments.

Professor Howorth emphasized his core message: the ESDP is very much a “work in progress.” At best, one can discern the parameters of development and possibilities but it is impossible to divine its future developments. History was a major theme in Howorth’s presentation. He argued that the European Union (EU) is driven more by historic forces than statesmen, and that ESDP should be envisioned and understood as a response to this EU historic calling.

He then progressed to outlining the material capabilities the possibilities therein for the ESDP. Howorth stressed that the EU needs to strike an appropriate balance between hard and soft capabilities. Civilian power alone will be insufficient in the future and the EU will need at least some kind of muscle. The question of the future will be what kind and how much muscle is needed. One of the key variables in this development will be “European schizophrenia;” how the EU will resolve various internal contradictions, and how European identity will develop. Despite problems, Howorth argued that there is an embryonic EU security culture. He also admitted that despite all the talk, overall progress with the ESDP has been very poor. For 27 separate militaries with a combined defense budget of 250$ billion the results are pithy.

As a remedy, Howorth advocated a combination of increased focus and overarching vision. Priorities should be made and resources should be standardized, rationalized, and pooled. In addition, eventually a clear EU grand strategy that is in accordance with EU capabilities is necessary. The EU should also avoid selection bias for ESDP missions by being too risk-averse. Howorth noted that the EU may need a failed mission to gain the necessary feedback. While he remained pessimistic over the prospects of military development, Howorth was optimistic about the ESDPs civilian aspects. Howorth reiterated, it is important to get the “mixture right.”

As for the Lisbon Treaty, Howorth foresees problems with bureaucratic rivalry, and thus finds it important that there be a clear delegation of responsibilities and that top jobs do not go to “big egos.” Of the Mutual Assistance Clause, Howorth noted that there was “not much to get terribly excited about” as he perceived it as primarily of symbolic than substantive importance – a view echoed by Forsberg.

Howorth’s optimism did not extend to the rival/companion of the ESDP: the North Atlantic Treaty Organization (NATO). In talking about NATO, Howorth returned to the theme of historic legacies. He contended that NATO was more of a historic relic, and that the ESDP is fundamentally different from NATO due to its historic legacy. Currently NATO “isn’t working,” and there is more consensus in an integrated EU than in a “global NATO.” Howorth ventured that Eastern European states would ultimately see the EU as more a source of security than NATO – a comment which generated flak from the audience. In the end, Howorth added that of course EU-NATO coordination is important, but it is mostly an issue of “mechanics.”

In conclusion, Howorth advocated a bold foreign policy for the EU: a new EU-US forum must be made; there should be new relationships with the BRIC countries and a plurality of neighborhood policies, with special attention to the Islamic world. Above all, discussion over the future of the ESDP should be made public.

Forsberg applauded Howorth’s presentation, and noted that he “tends to agree” with him. Forsberg used his turn to present a few questions over Howorth’s views of the forces driving the future of ESDP. In addition, the audience also asked Howorth about his conception of NATO and the transatlantic relationship. Howorth was pessimistic. He noted that the gulf between US and EU conceptions of the world has steadily grown. Both the EU and the US interests have changed. For that reason, he believes that NATO has weakened as a collective security alliance, while the relevance of the ESDP continues to grow. For that reason, Howorth notes, a new encompassing forum for US-EU issues is needed. Howorth’s overall view of the prospects of the ESDP was cautiously optimistic, but much still needs to be done. Thus amid generous applause and general satisfaction the seminar came to an end. 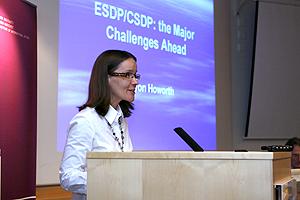 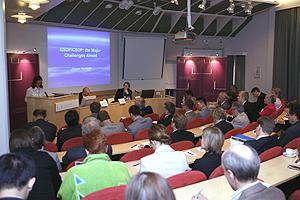 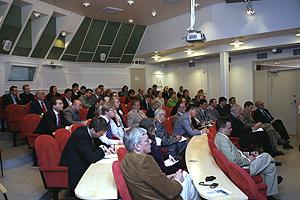 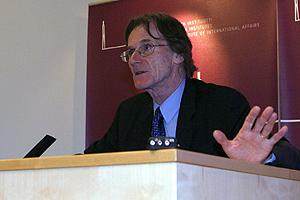 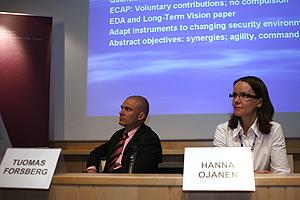 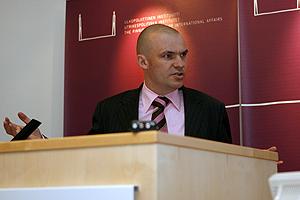