etusivu / Tapahtumat / EU in Central Asia: Revisioning the Strategy
jaa
jaa
Central Asia is at crossroads. The US is withdrawing the majority of its combat forces from Afghanistan and tries to shift its focus towards a regional economic engagement under the rubric of the new Silk Road between Central Asia and India. At the same time, China pursues its own Silk Road initiative in and across Central Asia through investments in resource and infrastructure development, while Russia seeks regional integration through the Eurasian Economic Union. How will the EU renew its strategy towards the region in a transforming context? What are the key priorities and tools of EU’s Central Asia strategy? Can the EU complement existing initiatives in the region or is there a new ‘great game’ in the horizon? What do the Central Asian countries seek themselves?
Speakers:
Ojārs Kalniņš, Chairman, the Saeima Foreign Affairs Committee
Ojārs Kalniņš is Chairman of the Saeima Foreign Affairs Committee and a Member of the Latvian Parliament, representing the party Vienotiba. He served as Ambassador of Latvia to the U.S. and Mexico from 1993 to 1999. Prior to his positions at the Ministry for Foreign Affairs of Latvia, he was public relations director of the American Latvian Association. Mr Kalniņš was raised and educated in the United States, and, once Latvia restored its independence, gave up his U.S. citizenship to become a diplomat. Following his posting as Ambassador, he moved to Latvia and worked as Director of the Latvian Institute from 2000 to 2010.
Jeremy Smith, Professor, University of Eastern Finland
Jeremy Smith is Professor of Russian History and Politics at the University of Eastern Finland. He has previously worked as Senior Lecturer in Russian History at the Centre for Russian and East European Studies of the University of Birmingham, UK. He received his PhD in History from the School of Slavonic and East European Studies, University of London. His main research interests concern the non-Russian nationalities of the USSR.
Comments:
Steve Parham, Post-Doctoral Researcher, University of Tampere
Steven Parham is a post-doctoral researcher at the School of Social Sciences and Humanities at the University of Tampere, Finland. He earned his Doctor of Philosophy in Social Anthropology at the University of Bern, Switzerland, where he is an Associate Researcher. His research focuses on Central Asian and Chinese political borders, socialist and postsocialist ethno-political loyalties and state citizenships, and discourses of border control.
Chair: Mika Aaltola, Programme Director, the Finnish Institute of International Affairs
Summary of the seminar:

Programme Director Mika Aaltola opened the seminar by saying that now the US is gradually retreating from Afghanistan, attention is shifting to the New Silk Road. Of particular salience is the role of the EU: what are its priorities and tools? Can it redefine its strategy in the unfolding ”great game” in the region?

Ojārs Kalniņš, Chairman of the Foreign Affairs Committee of the Latvian Parliament, opened his presentation by referring to history. For about 4-5 centuries Central Asia was the center of the world and the link between antiquity and the modern world. At present, in view of the growing geostrategic importance of the region, it has to be the centre of long-term strategic planning. Stability is critical, and the region could pose many challenges if not properly addressed. The EU must therefore revamp its European Security Strategy (ESS), making Central Asia part of a new global strategy. Kalniņš outlined five challenges. In terms of security, the region is faced with radicalization, trafficking, and border disputes. In terms of economy, he pointed out that membership of the Eurasian Economic Union (EEU) and trade links with the EU should not be mutually exclusive, as is clear in the ties between Kazakhstan and the EU. In terms of transport, the historical transport connection between the region’s north and south has now been restored. As for education, the region has a very young population, somewhat educated but often unemployed. As for civil society, human rights issues remain a challenge. Cultural, historical, and political differences need to be recognized. Bearing in mind these challenges and the fact that the region is composed of five countries with different priorities, the EU should apply a threefold approach: first, foster regional relations; second, create coalitions of the willing on specific issues; and third, enhance bilateral relations between EU member states and individual countries in the region.

Professor Jeremy Smith of the University of Eastern Finland starting his presentation by emphasizing the mixed signals the countries in the region have been sending in response to the situation in the Crimea. The Ukraine crisis has raised multiple immediate concerns, and has also resulted in numerous challenges relating to legislation, migration, statehood and finance. It has also led to Russia’s increased need for friends in the broader region, and to security competition between Russia and the US. At the same time we witness an increase in regional cooperation, with Kazakhstan in the lead. A lot of uncertainty remains in the EEU, however, in spite of its expansion. It is clear that the region is going through a key geopolitical period. For the EU this means that caution is needed. Central Asian states are finding their own way. Uncertainty over Russia does provide opportunities, however, as the EU is highly valued as a trade partner. The EU can furthermore have more low-key impacts on civil society development and on humanitarian issues.

Steven Parham of the University of Tampere emphasized in his comments that Central Asia does not constitute a homogeneous region, in view of the different attitudes towards Russia or the US. In Europe there are now growing tendencies to fine-tune our understanding of the region. This is clear in contentious issues including transport (built towards China) and sensitivities towards the different approaches taken by individual Central Asian countries. Relations with separate countries should not be mutually exclusive. 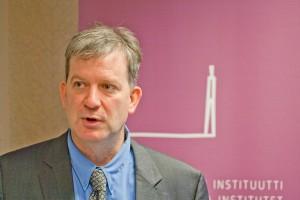 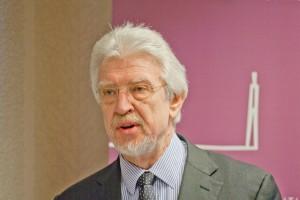 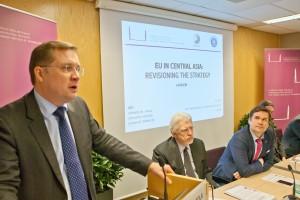 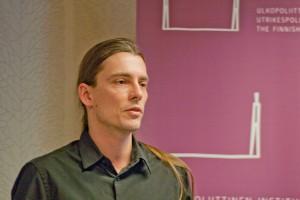 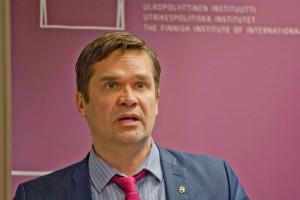