etusivu / Tapahtumat / EU-Turkey Relations: Need for a Fresh Start
jaa
jaa
Turkey’s development and prosperity are indisputably in the interests of the European Union. Now, as the EU struggles with questions of identity, the accession negotiations between the EU and Turkey have encountered renewed challenges. Public opinion and a number of EU member states’ governments are espousing solutions short of Turkey’s full accession to the EU. What are the implications of this? Do the member states have an obligation towards Turkey? What would be gained by Turkish accession? The EU and the values it advances have acted as a reference point for Turkey’s domestic reforms. What are the EU’s responsibilities towards Turkey?
Keynote Speaker: H.E. Egemen Bağış, Turkey’s Chief Negotiator and Minister for EU Affairs
Helsinki Spirit: Breaking the anchor-credibility dilemma in Turkey-EU relations
Minister Bağış will address Turkey’s reform process, including recently adopted legislation, policies and programmes put into practice. He will also address the current status of the negotiations with the EU in light of progress made on negotiation Chapters and the concrete contributions Turkey’s membership would bring to the EU, as well as the necessity for the EU to resume its responsibilities as an anchor in order for Turkey to make further progress on its membership path. His speech will also touch upon Turkish-Finnish relations.
Comments: Ms. Liisa Jaakonsaari, MEP
The European Parliament is the only directly elected institution of the European Union. Through the parliament’s delegations and committees it follows Turkey’s accession process closely and produces annual reports on it. Ms Jaakonsaari is a member of the EU – Turkey Interparliamentary Delegation.
Chair: Dr. Hanna Ojanen, Programme Director, European Union research programme
The Finnish Institute of International Affairs

Programme director Hanna Ojanen opened the event, welcoming the speakers and audience to Finland and to the Institute.

In his role as minister for European affairs and Chief negotiator with the EU, Mr. Bağış outlined the current state of play in the EU-Turkey accession process from the Turkish government’s viewpoint. A process begun in 1959 with Turkey’s first application for association and the signing of the Ankara Agreement in 1963, Bağış nevertheless considered the Helsinki Council of 1999 [which granted Turkey candidate status for EU accession] to have been the major turning point in the relationship.

Beginning his speech with an assessment of Finland and Turkey’s ties, he pointed out that the Ottoman Empire was one of the first to recognize independent Finland in 1917 and that Finland and the Republic of Turkey signed a Friendship agreement already in 1924. Bilateral relations have perked up after the Cold War and with what Bağış described as Finnish leadership in 1999, have risen to a new level. As an example of good relations, Bağış pointed out the Turkish Airlines direct flights connecting Istanbul and Helsinki, which were faced with a great deal of scepticism as they were opened in 2006, but are now regularly sold out. Trade volumes between the countries amount to a billion Euros worth annually and approximately 140 000 Finns visit Turkey each year. Bağış also alluded to the work of President Ahtisaari, as head of the Commission on Turkey, an independent group that has recommended a re-launch of the Turkey-EU relationship. Bağış considered Ahtisaari to be a leader with a vision.

On the matter of Turkey’s accession process, Bağış confirmed Turkey’s commitment and determination. He said that he was understanding of the present ”enlargement fatigue”, which is said to hamper especially some of the founding states of the union, but pointed out that a Turkey which fulfils all the requirements for EU accession is quite a different place from the Turkey of today. He anticipated Turkey then to be able to offer solutions to the EU’s problems. Already now it is the 8th largest economy in Europe and its banks have withstood the economic crisis largely unscathed. Half of Turkey’s population is below the age of thirty, constituting a young, dynamic workforce.

As an example of Turkish determination Bağış singled out the negotiation Chapter on the environment, for which Turkey has drafted and redrafted a 1500 page strategy – Bağış considered it to be an investment into the future of Turkey: ”We don’t mind the cost.” He pointed to the heady nature of the task of adopting the expansive EU acquis, but considered its adoption to be worth the effort already in itself as a tool of making life better in Turkey. He believed the 1999 decision to have created an anchor of credibility, which made Turks realize that the efforts required by the EU were worthwhile. Bağış pointed to the time between 2002 and 2004 as having seen a wave of reforms. He acceded that there had been a slowdown since then, due to political and juridical hurdles facing the AK party and challenges concerning the role of the military in Turkey, especially in 2007, which had nevertheless now been overcome. Bağış considered the time to be ripe for a re-energizing of reforms. As examples of reforms already executed this year, Bağış pointed out the introduction of a national Kurdish-language television channel, improved dialogue with minorities in Turkey, development aid to the southeast regions of the country, an improvement of Turkey-Armenia -relations, as well as the introduction of a parliamentary committee on gender equality issues and changes to the criminal code, which make it possible for military personnel to be prosecuted by civilian courts in civilian matters. He said that ministerial delegations tour the country, ensuring that reforms enacted are also implemented on the ground. As an example of positive integration with the EU, Bağış mentioned Euronews adopting a Turkish-language version, Prime Minister Erdoğan’s visit to Brussels and the creation of Bağış’ own current position. The EU, he said, is the strongest outside influence for Turkey, helping in democratization, enhancing human rights and boosting the economy.

Bağış said that Turkey is the easternmost country of the West and the westernmost country of the East. He used the twin metaphors of Turkey as a bridge and as a barrier – as a bridge Turkey unites continents, religions and peoples, but also acts as a mediator in disputes in the region and as a major energy corridor. As a barrier, it helps restrict illegal immigration and drug trafficking. It is active in fighting international terrorism as well, making no distinction between Al-Qaida, the PKK or November 17th groups. Turkey’s membership of NATO, the OECD, the G20, the UNSC and the Organization of the Islamic Conference allows it to act as a peace-builder in its near and far abroad, including Afghanistan. With 1,5 billion Muslims in the world, Turkey is a focus of attention. It could potentially act as an inspiration for many other states. How the EU treats Turkey is also keenly observed by other actors, such as African states and China. If Turkey were to be rejected by the EU on the basis of identity issues, this would send a negative message throughout. What is required instead, Bağış proclaimed, was a re-engineering of the ”Helsinki spirit”. He reaffirmed Turkey’s commitment to the accession process and considered Turkey to deserve membership once it fulfils the requirements. He anticipated Finnish support for Turkey’s aspirations to continue.

Mrs. Liisa Jaakonsaari, MEP, commented on the minister’s speech. She described the atmosphere of the EU-Turkey Joint Parliamentary Committee’s EU delegation, of which she is a part of, to be ”strange and strained”, with extreme views colliding. The right, according to her, is mainly against Turkish membership, but the Social Democrats are for it. If Turkey were to turn eastwards, the EU would “turn to the past” and she fears that growing public resistance in the EU is deepening resistance to the accession process in Turkey as well. She herself described the EU’s project of peace through three phases – reconciliation between France and Germany, followed by enlargement across the continent and now becoming a bridge between east and west. She considered Turkey’s accession process to offer the potential for a more multicultural, democratic society, which would refute the ”Clash of Civilizations” theory once and for all. The EU, according to Jaakonsaari, is a project built on common values, as opposed to one based on a common religion or ethnicity. Through Turkey’s accession the EU can act as a catalyst for example in terms of empowering women, not only in Turkey, but in terms of having an impact on Muslim women’s emancipation worldwide.

Mrs. Jaakonsaari considered Turkey to have been proven itself to have been a staunch ally through NATO and indeed to be reliable in fighting organized crime, trafficking in human beings and intercepting narcotics. She also pointed out the variety of Turkey’s flora and fauna, saying that Turkey’s accession would in effect double the richness of the EU’s ecosystem.

In the Q&A session, Mr Bağış responded to a question on the EU’s borders, saying that they are only in the minds of people. Turks, he said, were considered good enough to die for the values espoused by NATO during the Cold War. Now those same values are being espoused by EU and Turks should be considered good enough to live with them. He did not consider the EU to be a “Christian club” and pointed out that a Europe without Istanbul would not be complete. Bağış considered the EU to be a grand peace process and joked that the wars between Turks and present EU Member states had never been as bloody as the ones fought between France, Germany and the United Kingdom.

On the impact of the recent German elections, Bağış noted that the CDU had exchanged one pro-Turkey coalition partner for another. Turkey and Germany also remain interlinked through massive trade, tourism and the many Germans with a Turkish background, as well as the large amounts of German investments in Turkey.

Answering a question on energy diversification and the Nabucco pipeline, Bağış also touched upon what he considers to be the most important next step in the process: the energy question is an example of how the prevailing problems on Cyprus stall the entire accession process of Turkey. Little progress can be made as long as Cyprus effectively blocks the negotiations. He said that Turkey is willing to give its blessing to a lasting and fair solution on the island and expressed the fear that the present window of opportunity for reconciliation may not be open for much longer, as springtime elections on the Turkish side of the island are expected to result in the victory of a less conciliatory person than the present leader, Mehmet Ali Talat. Bağış noted that the Greek Cypriots rejected the Annan plan for unification in the referendum of 2004, but said that he also understood their leader, Dimitris Christofias. He is, after all, overseeing the part of the island which has three times the per capita income in relation to the other and enjoys international recognition. Bağış pointed out that currently only one EU member state conducts trade with the northern part of Cyprus – the Republic of Cyprus itself, leaving the other 26 to suffer the consequences of no progress. 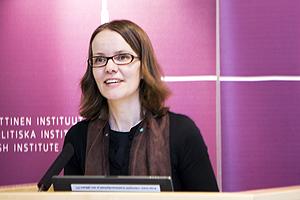 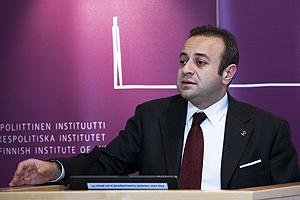 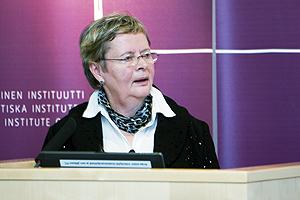 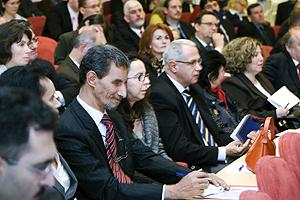 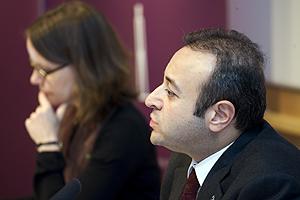