Islam has been a major religion in many parts of Europe since its earliest days, meaning that Muslim communities are long standing members of the wider European community. But today, due to fears over terrorism, security and immigration, European Muslims are facing mounting hostility. What can be done to counter this situation? Can a dialogue between cultures alleviate the fears of Muslims and non-Muslims in Europe?

Speaker:
Professor Ekmeleddin Ihsanoglu, Secretary General of the Organization of the Islamic Conference:

Professor Ihsanoglu took the office as the Secretary General of the Organization of the Islamic Conference in January 2005. Previously, he has held other positions within the organisation, as well as academic positions, including the position of the first Professor and founding Head of the Department of History of Science of Istanbul University. He is also the founding Chairman of Turkish Society for History of Science (TBTK) and ISAR Foundation.

The Organisation of the Islamic Conference (OIC) is the second largest inter-governmental organisation after the United Nations which has membership of 57 states spread over four continents. It seeks to act as the collective voice of the Muslim world and to safeguard and protect the interests of the Muslim world in the spirit of promoting international peace and harmony among various peoples of the world.

Professor Ihsanoglu began his speech by asking: Is Europe host or home for Muslims?

His presentation underlined that Islam has been an important element of Europe for centuries: Muslims lived in parts of what are now Spain and Portugal and the Muslim Empire of Ottomans was also present in Eastern Europe for centuries. Even after the defeat of the Ottoman Empire, significant Muslim minorities remain in the Balkans.

Islam and Christianity have common roots, Professor Ihsanoglu said. Both Christianity and Islam have Abrahamic roots and both derive from Greek philosophy. Without Arabic translations of Greek philosophical texts, many of the best known Greek authors’ works would not have reached the modern Europe. Medieval Islamic science was very advanced compared to its European or Christian counterparts.

Professor Ihsanoglu said that currently there are some 40 different Muslim ethnic groups in Europe. In addition, Muslim immigration to Europe in the last 50 years has multiplied the number of Muslims on the continent.

Professor Ihsanoglu regretted that both Muslims and Christians are held hostages by the radicals on both sides. He said that Muslim terrorists and European Islamophobes represent only a tiny minority on both sides respectively, but still try to endanger the millennial coexistence of Christians and Muslims in Europe and in the wider Middle East.

Professor Ihsanoglu ended his speech by highlighting that Islam has, for almost all of its history, been a part of Europe. Europe is, therefore, not a host but a home for Muslims.

Doctor Marko Juntunen of the University of Helsinki discussed the general tendencies among European social scientists who concentrate on Islam and Muslims. He said that traditionally anthropologists have studied only Muslims who live in Muslim countries. Social scientists have only recently become interested in studying the Muslim minorities of Europe.

The audience asked, among other things, the panellists about modernization and reformation of Islam. Professor Ihsanoglu emphasized that Islam has already gone through some reforms, but they are not necessarily similar to the European reformist movements. Doctor Juntunen said that there is currently a heated debate among Muslim scholars about modernizing Islam, but unfortunately this has not yet echoed among the wider Muslim population. Juntunen also stated that the Western media is making a great mistake by not showing interest in the internal debate which is currently going on among Muslim scholars. 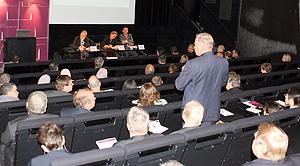 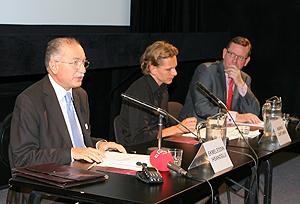 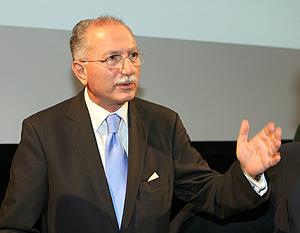 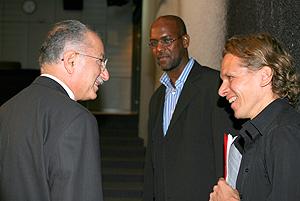