Developments in the EU facilitated technical dialogue between Serbia and Kosovo paved the way for Serbia’s EU candidacy. The benefits of the dialogue for Kosovo, however, are more unclear and debated.What are the concrete advantages of the process for Kosovo? Is the prospect of EU membership credible enough to produce constructive engagement in future rounds of dialogue?

Dr Edita Tahiri is the Deputy Prime Minister of the Republic of Kosovo and the Kosovo’s lead negotiator in the dialogue with Belgrade. Dr Tahiri’s doctoral thesis handled International statebuilding and uncertain sovereignty. She has done a long career in the Kosovo politics.

Tim Judah covers the Balkans for The Economist and is the author of three books on the region: The Serbs: History, Myth and the Destruction of Yugoslavia; Kosovo: War & Revenge and Kosovo: What Everyone Needs to Know. Judah has covered the wars in former Yugoslavia but also many other hot spots in the world.

Director of the Finnish Institute of International Affairs Teija Tiilikainen opened the seminar. She spoke briefly on Kosovo’s difficult journey, and how it has become an important issue despite its small size. She then introduced the speakers of the seminar.

Deputy Prime Minister of Kosovo Edita Tahiri, who was in Helsinki on an official visit, began her speech by telling that she would discuss Kosovo’s prospects for Euro-Atlantic and EU integration with the Finnish government, and hoped to gain support and exchange experiences on the challenges related to the integration process. She said that compromise in terms of sovereignty is inherent to the concept of the EU. It is her conviction that the Balkans should finally become part of the Union. Dr Tahiri pointed out that geographically the Balkans have always been part of Europe, but have not been able to operate with European values, due to the region’s turbulent history.

The first part of Dr Tahiri’s speech concerned the progress Kosovo has made in the post-independence period. During the four years of its existence, the youngest state in Europe has focused on its agenda of democratic state-building, with institution building as a priority. The constitution of the Republic provides the basis for a state of democracy, rule of law, and prosperity for all citizens and communities.

Kosovo gained independence later than the other ex-Yugoslav states. After the long delay, it needed to accelerate the state-building process. Kosovo’s current goals are economic development, a strong rule of law, and well-being for all citizens and communities, Dr Tahiri explained. Dr Tahiri characterised the reforms carried out by Kosovo, for instance improving the justice system, as pragmatic. They have two purposes: not only do they help create the functional state that the citizens expect, but they also bring the country closer to European standards, paving the way for EU membership.

To create conditions favourable to economic development and to attract foreign investors, Kosovo is investing in infrastructure: the construction of roads and highways. The building of new energy production facilities is also planned. Dr Tahiri mentioned Kosovo’s rich lignite resources that will be used for coal-based power plants. In the future, the country expects it will be able to even export energy. Minerals, agriculture and tourism are other areas that will be developed, and the country is rich in human capital in the form of young, educated people, Dr Tahiri said. She stated that Kosovo follows the philosophy of market economy, which involves privatisation. Dr Tahiri sees the country’s riches as the reason why it became the target of “colonial aspirations” in the first place. Now that Kosovo is able to use its resources to create growth, what is required is time.

Dr Tahiri then talked about the objective of ensuring the well-being of all citizens, including minorities, which is guaranteed by the constitution. According to Dr Tahiri, an affirmative action programme based on the Ahtisaari Plan has been followed in order to integrate the Serb minority. These attempts have yielded some results, but the northern part of the country remains a challenge because of Serbia’s meddling in the region, she said. She blamed the United Nations Interim Administration Mission (UNMIK) for failing in its mandate to govern the territory and its inhabitants, allowing Serbia to interfere in North Kosovo. However, she believes things are going to change, partly thanks to the technical dialogue that took place in Brussels. It resulted in seven new agreements, which is a step towards better relations between the two countries. The progress in encouraging, but for the implementation the help of the EU is needed. Perhaps then Serbia will accept the reality of independence, Dr Tahiri hoped.

Dr Tahiri also discussed the regional context. In her view the Balkan states have put behind them the major issues such as wars and conflicts. However in order to solve the remaining issues, it is imperative that the states engage in democratic and rule-of-law reforms, so that they reflect European values instead of concentrating just on their own geopolitical agendas. She also called for the EU to take a more active role in supporting the Western Balkans in the process of integration. The Union should unify its foreign policy vis-à-vis the region, and try to persuade those of its members that haven’t recognised Kosovo to revise their position. Dr Tahiri considers this a strategic move to promote stability, at a time when there are signs of nationalism in the region.

An important objective of Kosovo’s foreign policy is that the country would become a member of EU, NATO, the UN and other international institutions. In addition, the foreign policy is aimed at increasing international recognition of its statehood, Dr Tahiri said. To date, the Republic of Kosovo has been recognised by 90 countries, and intense lobbying is being done to convince the rest. She asserted that Kosovo has proven that independence was a smart move because it contributed to stability. Dr Tahiri ended by talking about Kosovo’s history, and how the nation became independent with the help of the international community after centuries of struggle. Now that it is a free nation, everyone living in Kosovo should be able to benefit from this freedom.

The next speaker, journalist Tim Judah from The Economist, had a more sceptical perspective on Kosovo aspiring to join the EU and NATO. He called the region a hole in the map, affirming the importance of EU integration in order to fill this hole. He also acknowledged the progress that has been made thanks to the technical dialogue. However, he pointed out that although Croatia is to join the Union soon, states like Macedonia and Albania are not presently moving forward in their accession processes, and that in this time of crisis, EU enlargement is somewhat on hold.

Referring to the title of the seminar, Mr Judah talked about the necessity of compromise. His view is that the fact that Kosovo is represented in regional meetings as Kosovo* with an asterisk (without the word ‘Republic’), is a sensible, if unpleasant, compromise. The footnote attached to the country’s name refers to the UN Security Council Resolution 1244 that established the UN administration in the territory, and to a ruling by the International Court of Justice on Kosovo’s declaration of independence. The government of Kosovo, including Dr Tahiri, has been attacked by the opposition because of this agreement.

Mr Judah went on to argue that although EU accession is important, there might be too much emphasis on this issue. He found the Kosovar and Albanian rhetoric on the EU to be reminiscent of communism in its idealistic fervour. More fundamental problems to be dealt with are unemployment, the economy, and the perceived corruption that deters investors, as does the disputed status of Kosovo. The threat of violence, while not significant, should not be disregarded either, Mr Judah warned. He also expressed his concern over the opposition party Vetevendosje’s idea of a “greater Albania” that might be unfavourable to business as well.

According to Mr Judah Kosovo has a strategic vision, but this vision must be adapted and developed. The fact that the country can now participate in over 30 regional organisations is a good start. In addition, Kosovo could have the role of a linchpin between what he has called the “Yugosphere”, and an emerging Albanian sphere. This would offer much needed business opportunities. In terms of regional cooperation, European examples like the Benelux countries and the Nordic Council cannot be copied but can provide inspiration, Mr Judah said.

Mr Judah concluded his comments by reiterating that Kosovo would be well advised to consider other things besides pursuing recognitions and membership in the international organisations. He suggested finding ways of “selling” Kosovo, for instance by placing trade and investment offices in Asia. The world is changing, and traditional ways of thinking are inadequate.

The seminar continued with questions and answers. The name of Kosovo was discussed. Dr Tahiri said that the Slavic version Kosovo will possibly in time be replaced by the Albanian form Kosova. She also answered a question about a possible redrawing of borders in the northern part of the country, saying that it was better to concentrate on the Euro-Atlantic agenda. Asked about Greece, she suggested that lessons can be learned from this country’s struggle. She saw the premature accession of Greece in the EU as a possible root cause of the problems, which proves the importance of reforms to meet EU standards.

Problems related to the rule of law were one of the topics of discussion. According to Dr Tahiri, the main challenges in this field are improving the capacities of the justice system, creating a culture of justice, and fighting corruption. The rule of law must be extended to the northern part of the country.

A representative of the Serbian Embassy made some remarks, rejecting Resolution 1244 as a basis for state-building, and questioning the effectiveness of attempts to improve the security environment for ethnic minorities. Although Serbia does not accept the independence, it is dedicated to dialogue. Dr Tahiri replied that Res. 1244 is indeed dead, but its text speaks about addressing the future status of Kosovo. Furthermore, she believes that most of Kosovo’s Serbs accept the reality of independence, and considers the decision by both states to engage in dialogue to be important. 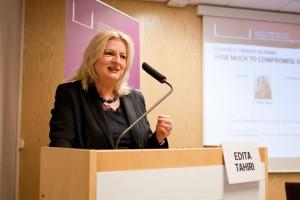 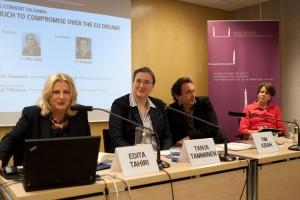 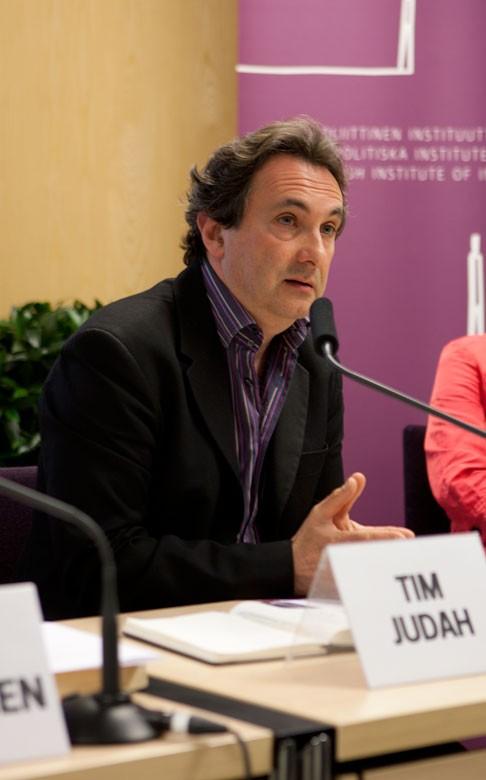