The concept of security has, following the end of the Cold War, evolved to include areas such as energy. The theme of energy security has been a persistent topic in the EU, with Russia as the largest energy supplier, and a record of incidents where Russian energy supplies have been affected by political reasons. While the European energy dependency has been considered problematic for some time – at least since the second Russia-Ukraine gas crisis in winter 2009 – the current instability and military aggression in Ukraine have channelled new political interest in the means of managing this dependency. With troubled relations with its major energy partner, it is necessary for the EU to consider the adequacy of its mechanisms of energy security management. Does the EU have sufficient legal tools to manage its energy relations with Russia? What are the limits of solidarity in the EU’s external energy relations?

”Solidarity and rule of law in EU’s Energy Relations with Russia: A far-fetched aim in the current state of affairs?”

Dr Umut Turksen is an Associate Professor at the University of the West of England and an executive of the Commonwealth Legal Education Association responsible for the European region. In addition to his expertise in EU energy law, Dr Turksen has extensive publications in international trade, financial crime, arbitration and investment. He has also provided consultancy and training to international businesses and government projects.

Programme Director Dr. Mika Aaltola from FIIA opened the seminar with maps illustrating the change from traditional territorial geopolitics to geoeconomics. Territory and natural resources have not lost their meaning as sources of conflict, but flows of energy, goods and finance have gained importance. Energy issues cannot be separated from foreign policy as the Ukraine Crisis has demonstrated. Power can now be attained by creating asymmetries and dependencies as well as overcoming the vulnerabilities created by interdependence.

Dr. Umut Turksen remarked that the EU was built upon energy cooperation. EU treaties emphasize solidarity and rule of law and these principles should be included in EU-Russia energy trade relations. However, the lack of democratic governance and rule of law among the countries producing energy increases insecurity in energy trade. We do not have legal instruments for handling the disputes which makes us vulnerable. Russia has been able to use energy as a dividing political tool among EU Member States, as the EU, if it was united, could also use its leverage against Russia. Russia is dependent on selling energy to the EU market, and its strategies and infrastructure rely on the EU in terms of geography and finance. The Treaty of the Functioning of the EU (TFEU) includes general and specific provisions that constitute the legal basis for solidarity to be involved in energy agreements. However, they leave room for interpretation and bilateral actions of Member States seem to continuously challenge the overall EU objectives and principles. The Member States have different kinds of relationships with Russia varying from strategic to pragmatic partnerships, which complicates the achievement of a common position based on solidarity and rule of law. A rules-based system, diversification of energy sources and cohesion within the EU would facilitate balancing the asymmetrical energy relations.

Senior Research Fellow Dr. Antto Vihma commented Dr. Turksen’s presentation from an International Relations point of view. He noted that the Ukraine Crisis is in many ways related to geoeconomics. It also contradicts international law and there seems to be an increasingly normative conflict with increasing anti-West messaging. The challenge to energy solidarity is threefold: international governance of energy is difficult to achieve due to sovereignty sensitivities; bilateral economic ties between the Member States and Russia vary; and Russia’s political appeal in the domestic discussions in the EU divide the Member States. Nevertheless the crisis should be seen as an opportunity to expand the solidarity and implement the existing legal framework on energy issues. Additional comments were delivered by Senior Advisor Lauri Kärnä, who emphasized the need to get back to ‘business as usual’ while governments and the EU should take care of the political crisis. He also underscored the need to have emergency plans and security of supply in order to function in times of crisis.

The discussion that followed included topics such as European countries’ exportation of gas to Ukraine during the crisis, the future of the Energy Charter and alternative energy sources. 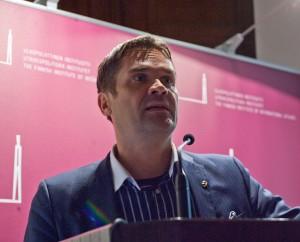 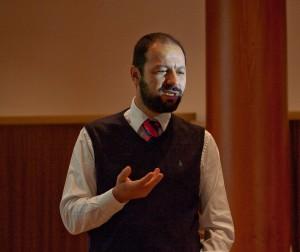 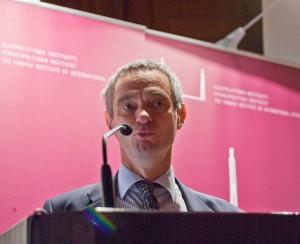