President Dmitri Medvedev has recently argued that Russia has to prepare for changes and modernise
its economy and political system. In the seminar two institute’s researchers evaluate the promise
and the weakness of the Medvedev agenda.

Dr Arkady Moshes welcomed everyone to the seminar to discuss whether the rules of the game in Russia are changing. Dr Moshes reminded that we are now in the middle of Medvedev’s presidency, and that this will be a crucial year because if the reforms in Russia will happen, they will happen during this year.

Dr Sinikukka Saari started by saying that it is often argued that Putin has brought stability and order to Russia. The political order was brought about by strengthening the central state and presidential power at the expense of other actors. His big project was to regain and increase the power that the centre had lost to the regions and to the business oligarchs during the Yeltsin years. During the 2000’s the power vertical, the idea of which is that the power should be concentrated at the top, has strengthened. However the image of a streamlined and effective system does not entirely correspond with Russian reality. One of Putin’s reforms was to put the regions in order and he, for example, replaced the direct election of governors with the presidential right of nomination. In reality the consensus between the regional and central elites is often hollow. Although the federal centre has the upper hand on paper, this is not always the case in practice. The loyalty is based on an informal contractual relationship between the centre and the regions. The second step for Putin has been to make the business oligarchs toe the line and as a consequence they have become ‘state oligarchs’. Putin has also restructured the political space in Russia, which now lacks democracy, transparency and almost all bottom-up initiative. The final brick in the power vertical was the restructuring of the civil society. Putin wanted to benefit from the positive output of civil society activism, yet eliminate the dangers it posed to the ruling elite. As a conclusion Saari stated that the stability is not well-rooted because political power is highly personalized and the system lacks legitimate feedback channels. The power vertical is much more fragile that what the current political structure indicates.

Dr Katri Pynnöniemi shared some thoughts on the future prospects of Medvedev’s presidency. Medvedev’s recipe for the modernization is the ‘computerization of Russia’. His priority is clear: economic development comes first, although he claims that both the economic and political spheres are in need of modernization. Medvedev has avoided challenging the system that is characterized by the autocratic mode of governance, corruption and paternalism. The weaknesses in Medvedev’s modernization are quite clear. Modernizing the economy is difficult in a system where the elite benefits from its backwardness and raw-material dependency. Also, corruption is difficult to root out in a closed, top-down system where the lines of responsibility are unclear. It is probable that despite Medvedev’s fine rhetoric, he is not even going to try to modernize Russia. He is in a weak position to criticize the system that put him in power and he is really not challenging Putin’s line.

Dr Saari considered what the West should then do. According to her, Western actors should not nurture false hopes regarding Medvedev’s proclaimed liberalism. Medvedev and Putin are not representing two distinct lines of thought. They share the same agenda, only with different wording and emphasis. Saari stressed that we should not pay attention to the discourse, but to what is actually happening. Russian economy cannot be modernized without getting rid of the power vertical and its corruption. There is no such thing as quick fix for Russia’s systemic problems. Medvedev sees the West as a source of the high-tech and know-how that Russia desperately craves. The West should use this opportunity to engage actively with the country, yet at the same time openly and consistently hold onto those issues that are important to the West.

In the Q&A session, the role of the United Russia was discussed and it was stated that the party is more fragile than it seems, as it would be nothing without Putin. According to both Saari and Pynnöniemi, the party dies or flourishes depending on Putin. There was discussion about the role of critical media and journalism in Russia, for example that of Novaja Gazeta. It was noted as a positive factor that Medvedev is not as paranoid about critical journalism as Putin was. Medvedev has a different kind of approach and attitude towards it. Although this attitude is a good sign, it doesn’t mean anything in itself. Besides, media critical of Putin is very rare in Russia. A question was posed on Medvedev’s rhetoric and whether his nice speeches are fake or if there is some hidden agenda behind them. Dr Pynnöniemi stressed that it is not possible to find any logic in Medvedev’s agenda and there is no hidden reality. His public policy is very empty and it is impossible to say what the intentions really are.

There was a comment that Putin’s regime is very nervous because money, its tool, is now running out. It was also discussed that there is nervousness in the regime because it is not ready for the modernization and innovations. Because the ruling elite benefits from the weakness, modernization is very difficult to carry out. There is also a feeling that the last time reforms were made, it led to the collapse of the Soviet Union. This is why the ruling elite do not want modernization; they do not want the regime to come to an end. There was a discussion about Russia’s future, which was predicted in a pessimistic way. Dr Saari stated that there will be no quick fix, nor a quick crash in Russia. In 10 years there will be some change as the current system will not sustain. Russia will muddle through and it will be a long and painful process. Dr Moshes added that the gradual degradation of Russia is taking place all the time and it can be seen through the constant worsening of the social situation. 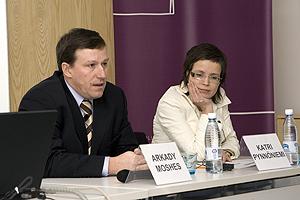 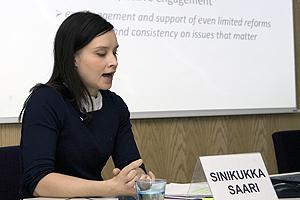 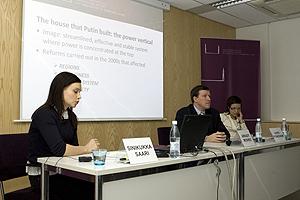 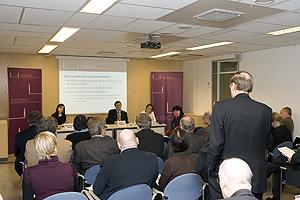 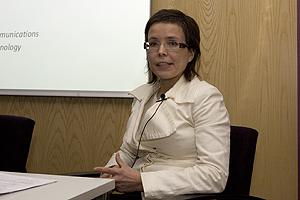