etusivu / Tapahtumat / Northern Dimensions as the Locomotive of the...
jaa
jaa

Former Canadian Foreign Minister Dr Lloyd Axworthy took to the podium at the FIIA seminar on the economic potential of Northern Dimension politics. During his term as Foreign Minister Dr Axworthy was an outspoken champion of the concept of human security. He again employed this concept as one of the bases of his presentation which itself was peppered with anecdotes from an eventful career. He argued that Nordic cooperation, especially under the auspices of the Arctic Council, makes both economic and ethical sense. The ethical dimension was emphasized in the speech – perhaps slightly contrary to the official seminar topic and perhaps also expectedly, given Dr Axworthy’s political legacy.

Human security refers to threats to the well-being of individual citizens as opposed to the dangers that nation states face in the international arena. A striking example offered by Dr Axworthy of a topical human security problem concerns the indigenous peoples of the Arctic regions and the impact unsustainable economic development, consequent climate change and melting of the polar ice caps have on their traditional way of life. In this case sustainability has already become a direct human rights issue. The Inuit peoples happen to be the first disaffected by climate change, the rest of humanity risk sharing their fate in the not-too-distant future. Dr Axworthy views the Arctic Council, the 11-year-old intergovernmental forum composed of Canada, the US, the Nordic countries and Russia, as an organization well-equipped for dealing with human security issues in the Arctic region. The organization already reacted to the warning signs of climate change over 10 years ago when the attention of the international community was still directed elsewhere. The Council also includes representatives of the indigenous peoples of the Arctic regions. The potential of the Council must be further realized with more funding and efficient instruments of governance. Referring to the latter, Dr Axworthy emphasized the importance of multilateral ratification of an international treaty governing Arctic waters, such as the UN Convention on the Law of the Sea, still unratified by the US.

Directing political will northward is ethically sound, then. It would also be economically far-sighted. The potential of the polar regions for global shipping and natural resources extraction is remarkable. Making use of this potential again requires good intergovernmental governance and the Arctic Council would be a natural central point for this type of governance.

Mr Paavo Lipponen responded to Dr Axworthy’s speech with his own, recalling the inception of the Northern Dimension of the EU. Mr Lipponen discussed his environmental concerns, too, and paid tribute to Dr Axworthy´s efforts in the field. Mr Lipponen called for sterner measures for combating climate change, proposing that a clear reduction goal for carbon dioxide emissions be set. Mr Lipponen recalled that, at the time of drafting the EU Northern Dimension, the option of including the US and Canada in the framework was brought up. Inclusion of the US, however, would have proven challenging as US national interest might have collided with the intentions of other actors of the policy framework. The involvement of Russia in the Northern Dimension, on the other hand, was very important and successful. Mr Lipponen has also detected renewed interest in increasing cooperation under the Northern Dimension. The basic structures – agreements and financing – of this cooperation framework are in good working order.

Lloyd Axworthy is President and Vice Chancellor of the University of Winnipeg. Dr. Axworthy acted Canada’s Foreign Minister from 1995 to 2000 and his extensive political career has spanned 27 years. He became internationally known for his advancement of the human security concept, in particular, the Ottawa Treaty – a landmark global treaty banning anti-personnel landmines. For his leadership on landmines, he was nominated for the Nobel Peace Prize. For his efforts in establishing the International Criminal Court and the Protocol on child soldiers, he received the North-South Institute’s Peace Award. 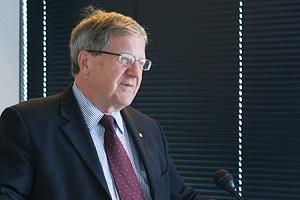 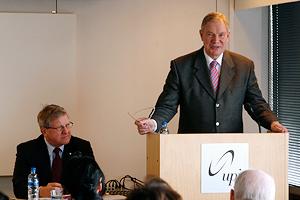