etusivu / Tapahtumat / Over the Brink: East Asian Security Scenarios in a...
jaa
jaa

What are the security implications if North Korea, as we know it today, ceases to exist? What are the plausible scenarios for North Korea’s potential reform or failure as a state? How would key states and state-unions respond to North Korea’s transition in the short term? And to the new East Asian geopolitical order and security environment in the longer term?

In this seminar FIIA brings together a panel of six experts from the US, South Korea, Russia, China, Japan and Europe to debate on the security of East Asia in a Post-North Korean age.

13:30 Panel Discussion 1: Reform or Ruin – North Korea over the Brink

Chair: Dr Tarja Cronberg, Chair of the Peace Union of Finland and former Minister of Labour

The Finnish Institute of International Affairs panel debate seminar, which brought together six experts on North Korea and the security issues related to it in East Asia, was opened by Dr Teija Tiilikainen, the director of the Institute. The keynote address was then delivered by Professor Rüdiger Frank who began by pointing to the disproportionate attention that North Korea receives, measured by conventional political theory. However, the country happens to be situated in the heart of geopolitical rivalry and, more importantly, possesses nuclear capability, forcing the rest of the world to pay attention.

While North Korea’s impact is particularly significant vis-à-vis its key stakeholders, its fate bears ramifications for Europe, too. Nuclear proliferation is a real concern, and conflict on the Korean Peninsula would destabilize the global economy. The transatlantic security bond would also become an issue. Even without conflict, if tensions remain high Europe can expect to be approached by both Washington and Beijing to choose sides on how to approach North Korea. Still, the laws of market economy have been gaining foothold in North Korea during the past decade, and this is conducive to further change in the country, both economically and politically. North Korea’s major problem now is sustaining its non-market-friendly political system with the marketisation of its economy – indeed an uneasy combination.

During the panel debate, there was some agreement over the fact that economic thinking is changing in North Korea. Speaking from an American point of view, Mr Scott Snyder from the Asia foundation agreed with Professor Frank about the emergence of market economy, but emphasized that the political system would restrain the advance towards further marketisation, as the political and economic systems would simply be incompatible. Still, even North Korea’s foreign policy is highly marketised: the country is trading in goods like missiles to maximize margins and to play off other regional actors against each other. Whereas China can offer a model for development, Mr. Snyder questioned whether it would be the right model.

Professor Alexander Lukin, however, brought up the need to view the situation of North Korea from the perspective of its ruling establishment. With one family essentially at the top of the hierarchy in a thoroughly militarized society, there is clear opposition to the redistribution of wealth, and thereby influence, that greater marketisation of the North Korean economy would lead to. Opening its borders for trade and exposure to other values and practices would also undermine the regime’s hold on power. Furthermore, marketisation on its own would not be enough for political reform – it also requires economic growth.

Although speculation about North Korea’s collapse has been rampant for two decades already, Professor Zhang Tiejun saw collapse as an unlikely outcome. China, North Korea’s nearest ally and supporter, is weary about a prospect of a unified Korea and prefers the division, but it nonetheless supports reform in the reclusive state. There is obvious concern about the possibility of North Korea’s provocative military stance triggering an arms race in its neighbouring countries, most notably in Japan and South Korea. This would lead to overall military tension in the region. Mr. Snyder compared solving the North Korea issue to a combined lock where all pieces have to be in the right place at the same time, referring to the right regional circumstances as well as the right inter-Korean circumstances. Tension at either level will inhibit reconciliation.

In his presentation, Professor Takesada Hideshi summarised the central aspects of Kim Jong-il’s military doctrine, which in turn are the foundation of the regime’s survival against external threats and of its legitimacy at home. Professor Hideshi recognized the plausibility of significant change in the country, however, and China is presenting the North with a tangible model for economic development. The Kim regime may fail but there are other domestic actors who could wield the necessary influence to provide North Korea with a new power structure.

Dr Cha Du-hyeogn also presented various plausible scenarios for North Korea, but highlighted the destabilising variables that lye in all of them. Reforming and opening up the country could produce disharmony between the people’s expectations and what the government is willing to provide. Also, the military is unlikely to give up its privileges easily. While North Korea may be sending signals of certain reform, security circumstances may still change, causing it to withdraw to its original policy of defiance.

There was broad agreement over China’s importance when considering the stance of North Korea. Professor Takesada pointed out, however, to the need to distinguish between China’s role in North Korea’s economic reform, and its nuclear programme. It is in China’s best interest to safeguard its investments in North Korea and therefore to support economic reform and stability in the country. On other hand, the greater the tension between China and its smaller Asian neighbours and America, the more likely China is to support North Korea as a staunch proxy naysayer to America’s involvement in East Asian affairs. Professor Lukin also underlined this duality in Chinese perceptions of North Korea.

Professor Frank reminded the audience about the importance to remember that South Korea remains the North’s primary policy concern. The existence of the South Korean state denies Pyongyang the role of governing over the whole peninsula, and therefore inter-Korean tension is inherent in their division. The question of Korean unification, as justified an idea as it initially may seem, is nevertheless a highly complicated matter. Professor Zhang pointed emphasised China’s interest in maintaining North Korea as a buffer between itself and the US forces in South Korea, whereas a unified Korean peninsula could bring US forces right to the Chinese border. On the other hand, North Korea’s very existence is ostensibly the primary motive for America’s presence on the peninsula, and its disappearance would require re-establishing reasons for continued deployment of troops.

According to Professor Lukin, Russia welcomes the prospect of Korean unification, as it would produce a potentially vibrant economic neighbour to which Russia could have good access through its sizeable and flourishing Korean diaspora. Professor Takesada gave reasons to why Japan might also welcome unification: a strong unified Korea could sustain a triangular East Asian balance between itself, China and Japan; Korea’s economy would not threaten Japan’s economy; and unification would probably lead to a degree of disarmament on the peninsula.

If Korea were to become unified, many of its neighbours would like to see it become “neutral” and unaligned. This, of course, highlights the subjectivity of “neutrality”. From a US point of view, a neutral North Korea would be free from Chinese influence, and vice-versa. Dr Cha, however, questioned why a unified Korea would want to opt for neutrality. From the perspective of Korea’s sovereignty in the geopolitically tense region that East Asia remains, it would be natural to seek security from a stronger power than itself. Would the North Korean regime implode, South Korea would realize that restructuring the new Korea could not be a unilateral South Korean affair, but international powers, possibly through the UN, would have to intervene in some manner. 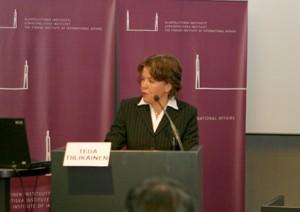 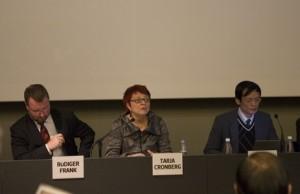 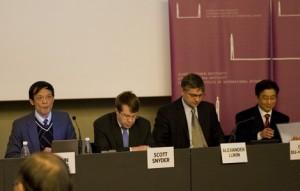 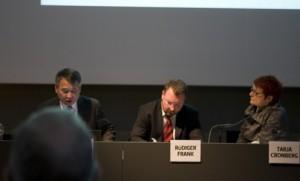