In a round table organized by UPI-FIIA together with the Ministry for Foreign Affairs of Finland, Doctor Anders Strindberg presented his views on the current situation in Lebanon. His central message was that the present events in Lebanon should be understood through the internal dynamics of the country and not only, as usually, as if Lebanon were a political football of external actors. It is precisely the internal rivalry between different ethnic groups and the strife for power which is, once again, about to drag the country into a civil war.

The July war in Lebanon has had many national consequences, the most important of which for the current developments have been the rise of public support for Hizbullah and the decrease of support for the Siniora government. These two consequences have brought the current political crisis to Lebanon.

The latest street protests in Lebanon have two interesting aspects. Firstly, the recently formed alliance between Hizbullah and the Christian Free Patriotic Movement (FPM), according to Strindberg, is at the moment what prevents Lebanon from falling into a civil war. This alliance will be maintained as long as both sides receive advantages from it. If political assassinations continue, the country’s current fragile balance might be broken. Another interesting aspect is that the international media tends to present Hizbullah as a pro-Syrian movement only and does not see the home grown agenda of the party which is to end the quota system in addition to postponing the implementation of the UN resolution 1559 which calls for the disarmament of all armed groups. Hizbullah is also demanding for veto power in the government which would allow it to prevent any further investigations into PM Hariri’s murder. What is often left unsaid, though, is that other smaller political blocks already have this power.

A new disquieting development is the reappearance of Christian armed groups which haven’t been seen since the civil war which ended in 1990. There is a power struggle inside the Maronite (Christian) camp which adds to the potential for an escalation between different sectarian groups in the country.

The lesson from the conflict and the message it gave to the region was that even friends of the United States do not receive help when they most need it. After the war, Prime Minister Siniora made a significant policy shift from seeking domestic support and legitimacy to seeking support of foreign governments exactly as leaders such as Yassir Arafat, Hamid Karzai and Nouri al-Maliki have done. This has had detrimental consequences for the United States’ and especially the EU’s image in the Middle East when compared to the analogous events taking place in Gaza and Western attitudes towards the current Hamas government.

When asked on the importance of external influence in Lebanon, Dr Strindberg admitted that still, the interests of Lebanon cannot be separated from those of Syria. Damascus does not tell Hizbullah what to think but it certainly asks. Strindberg pointed out that the Hariri investigations led by the United Nations have been unbalanced in the sense that they have not focused in such factors as organized crime, business interests, sectarian struggle and especially corruption. However, the Hariri murder investigations have changed their focus under the guidance of Serge Brammertz and Syrian involvement has become one possible option among others. Dr Strindberg affirmed that Lebanon still needs good neighbour relations with Syria in order to survive.

Regarding the relationship between Hizbullah and Iran, Strindberg assured that Syria is more important than Iran as an ally for Hizbullah although the ideological influence of Hassan Nasrallah is an important factor. As to Iran, its regional ambitions have to do with securing larger regimes as allies and making Shia groups stronger, particularly in the Gulf region. All in all, Iran’s influence is more limited than thought and the claims of the country’s ambitions to save Palestine are far-fetched. Dr Strindberg made an interesting point by mentioning that Iran – as well as Hizbullah – can work with such Sunni groups as Hamas and Islamic Jihad because they are not radically Sunni but operate with a “Post-Colonial Arab Nationalist” agenda.

How probable is it that another civil war breaks up in Lebanon? What kind of events could lead to an escalation? Dr Strindberg asserted that the Hizbullah-FPM alliance which is still preventing a new civil war from breaking out can easily be shaken by a small number of assassinations of prominent Christians. The recently assassinated cabinet minister Pierre Gemayel was not such a person, but his case still lies unsolved. Who killed Gemayel does not really matter if rival groups decide to believe it was their enemy and start fighting. The possible breaking out of a new civil war in Lebanon is thus a matter of internal politics. 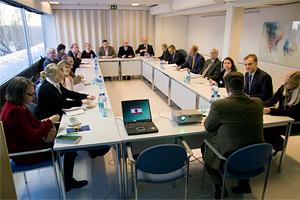 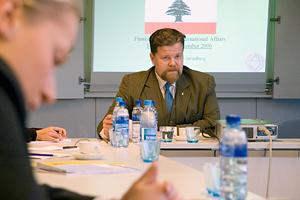