The timely Roundtable Discussion, one year into Obama’s term in office, will focus on the administration’s “return to multilateralism”, its successes and failures over the past year; and its policy implications for the European Union in the UN, G20, and other international fora.
Speaker:
Richard Gowan, Research Associate, Associate Director for Policy, Center on International Cooperation, New York University
Mr. Gowan is responsible for developing CIC’s outreach and profile, in addition to working on peacekeeping, multilateral security arrangements and the relationship between the UN and the EU. Formerly manager of the Europe Programme at the Foreign Policy Centre (London), he is also a Policy Fellow at the European Council on Foreign Relations (ECFR). He has worked with the OSCE Mission to Croatia, and published on the political philosophy of Raymond Aron.
Comments:
Jussi Hanhimäki, Finland Distinguished Professor and Professor of International History and Politics, University of Tampere; Graduate Institute of International and Development Studies, Geneva
Prof. Hanhimäki works as a FiDiPro-professor at the Department of History of the University of Tampere. He is also Professor of International History and Politics at the Graduate Institute of International and Development Studies in Geneva. An expert in the Cold War and American Foreign Policy, he has focused especially on the transatlantic dimension of the Cold War.
Chair and Comments:
Mika Aaltola, Academy of Finland Research Fellow, the Finnish Institute of International Affairs
Dr. Aaltola is Principal Investigator for an Academy of Finland funded Project Ethics, Politics, Emergencies. He is also an adjunct professor at the University of Tampere, where he worked as associate professor 2000-08. He was visiting professor at the University of Minnesota during 2006-2008. His areas of expertise include IR theory, U.S. and Finnish foreign policy, international health governance, politics of humanitarian aid, politics of memory, and political religion.

Summary of the Roundtable Discussion:

One year into Obama’s term in office, the FIIA had the honour of hosting a timely roundtable discussion around a presentation by New York University Professor Richard Gowan, focusing on the Obama administration’s “return to multilateralism”, its successes and failures over the past year; and its policy implications for the European Union in the UN, G20, and other international fora.

Professor Gowan opened his presentation by arguing that Obama’s approach to multilateralism has in fact been more radical than is commonly appreciated. He defended his claim by comparing the current state of affairs with what the US might have looked like under John McCain’s Republican leadership, which would probably have implied, apart from a lot less coverage on Sarah Palin, a weaker response to the financial crisis; increasingly confrontational politics vis-à-vis Russia; and impaired G8-level cooperation, not to mention the G20.

Obama has demonstrated a willingness to conduct great power politics in a multipolar world on an almost equal footing with other powers. However, Gowan points out that European leaders have been struggling to respond effectively to the multilateral agenda set by Obama, due Europe’s lack of cohesion and inability to make comprehensive decisions. Meanwhile, the US has had no choice but to give China, India and other emerging powers priority over Europe.

Washington’s new manner of conducting policy is still at an early stage, and the integration of its administrative organisation is still incomplete, although it does have a coherent vision on foreign policy. Moreover, in addition to lack of organisational cohesion, Obama is struggling with the unrealistic expectations set for his administration, which has translated into somewhat unwarranted disappointment caused by his failure to meet those targets in no more than twelve months. However, the Obama administrations achievements up to this point may be seen as the groundwork for more substantial advances yet to come.

The US is soliciting parties to multilateral fora with the aim of making concerned parties aware of their responsibilities, but finds itself exasperated not only by Europe’s inability to respond but also by the uncooperative attitudes from rising powers. China is keen to defend its short-term economic interests while India is inflexible on issues like Sri Lanka.

Professor Jussi Hanhimäki agreed by and large with Gowan’s analysis, but he challenged the notion of whether McCain’s presidency would have altered American foreign policy, which nonetheless has to be based upon a legacy left by the previous administration. Furthermore, he pointed out that Obama’s multilateral approach, albeit an established trademark of his, is no unique feature among US presidents. Others have tried multilateralism, of which the United Nations is one example. Often, however, multilateral initiatives by the US are seen as attempts to harness support for America’s policy agenda. Multilateralism is fundamentally problematic as long as the US does not compromise its prerogative for the use of force in security issues. Also, “going multilateral” can be detrimental to American politicians’ popular support, as internationalism is held in relatively low esteem.

The roundtable discussion yielded a lively debate over a range of issues. Some participants raised the question concerning the general international lack of faith in the Obama administration’s potential and its impact on policy-making hereafter. Another point of debate was whether Obama’s cooperative stance was giving China’s realist politics too much ground, or whether China’s current hard mood is merely a consequence of Beijing’s concerns over domestic socioeconomic instability. Moreover, Obama’s conciliatory gestures towards Russia, e.g. dismantling plans for erecting a ballistic missile defence in Eastern Europe, have been criticised as “giving something without getting anything in return”. Nonetheless, Washington still sees Kremlin as fundamentally weak and without the ability to “capitalize” in any decisive manner on such concessions. 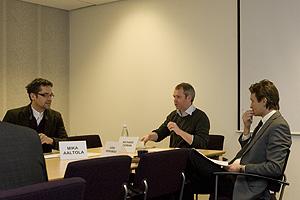 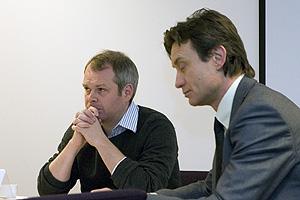 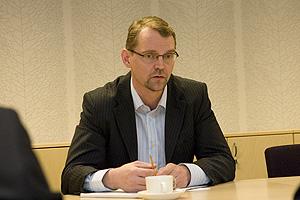 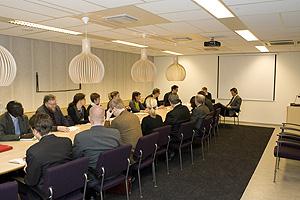